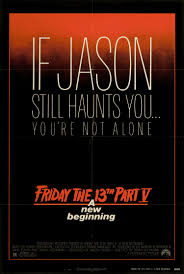 Heh-heh-heh, ha-ha-ha, it’s Burl; and how can there be two Friday the 13ths in one month? I don’t know, but here’s Friday the 13th part V: A New Beginning for you! It’s one of the lesser-loved installments, and I can certainly see why! It’s fairly terrible, although, and I must stress this, ol’ Burl has seen worse!
I don’t recall the words “Crystal Lake” being uttered once in this chapter, nor a lake being shown on screen, but I suppose we can assume the action takes place somewhere not far from that storied summer camp! We join Tommy Jarvis, no longer the chippy-cheeked kid he was in Friday the 13th part 4 (after all, they could only afford Corey “Gremlins” Feldman for a single day’s shooting), but now played by John Shepherd from The Hunt for Red October, as he arrives at his new way station, the Pinefield Youth Development Center! This is a halfway house with an impossibly broad mandate, caring for an aggregation of youths with afflictions ranging from the mild, like stuttering or being a goth, all the way up to serious cases of full on, bug-eyed, murderous psychosis!
This latter comes into play when a harmless, chocolate bar-loving buffoon is chopped up by an axe-wielding buggy-wug, the aforementioned psychotic! As the other inmates (clients? patients? campers?) wail and cry, and the police cart the nutter to the pokey, two ambulance men arrive to haul away the buffoon’s corpse, which has been sectioned and neatly stacked like cordwood! Roy, one of the paramedics, reacts to this sight like Dracula being shown a crucifix, and there are several lingering close-ups of Roy’s face in a rictus of disordered passion! Ha ha, and why could this be?
Well, the pokings start in earnest then! Is the traumatized Tommy behind it all, having somehow inherited Jason’s murderous inclinations by killing him in the previous, so-called final, chapter? Or is it Jason himself, resurrected again? Or is the killer someone completely random, like, say, Roy the paramedic? Ha ha, no, that would be ridiculous!
And yet the outrages carry on unabated, a tidal wave of homicide that carries up any and all in the area! Two objectionable greasers find themselves eating a road flare and receiving a throat-slice, respectively! An itinerant handyman, who for the briefest of moments fills the role of red herring, catches a machete in the stomach! The impossibly unpleasant bumpkin family next door receive a decapitation and a face-chop! Eyes are poked out with shears, heads crushed with leather straps, and an unfortunate soul singer is transfixed by a pole while relaxing in the outhouse! There’s a lot of mayhem, but most of it is implied, or seen after the fact, or hardly seen at all; the ratings board people, then at the zenith of their restrictive powers, did their shearwork as ruthlessly as Jason (or is that Roy the paramedic) himself!
So of all the Friday the 13th pictures, it has the most murders while being one of the driest of them gore-wise! That’s fine I suppose, but in addition to gore it lacks suspense, horror, terror, frights, emotional, psychological and logical sense, solid performances and competent mise-en-scene! What it doesn’t lack is salty language, which it wields like a child who’s just been introduced to the concept, and fecal references, which it positively wallows in! Ha ha! 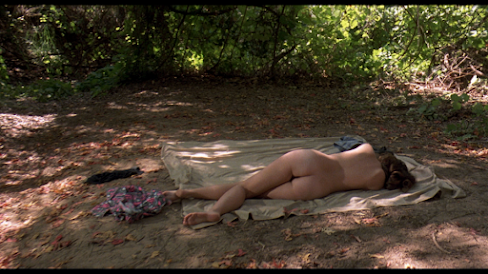 All the killings at least keep it lively! And if the conclusion, in which, yes, Roy the paramedic proves to be the killer, because he was traumatized when the chocolate-bar oaf who was chopped up turned out to be his son (and even the characters who are explaining this, as if it’s the last ten minutes of Psycho and Roy is Norman Bates, just sort of shrug at that motivation), indeed disrupts the Friday the 13th timeline which some people apparently hold dear, at least it’s something different! I give Friday the 13th part V: A New Beginning one giant pot of watery, horked-in soup!
Posted by Burl at 16:47