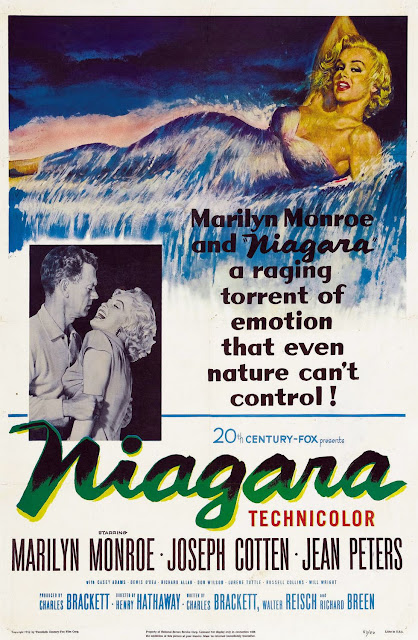 Hi, Burl here, and welcome to the falls! Yes, I always wondered if the movie Niagara had much to do with Niagara Falls themselves, and I’m here to report that the answer is boy, do they! Ha ha! The great falls feature so heavily in this move that they had to invent a special device to place over the camera lens to keep it clear of mist! It’s true!
The location photography is only one of the charms of this picture! Henry Hathaway directed it, and I confess that I always associate his name with Westerns, even though he made plenty of films noir and other types of pictures too! Ha ha, he’s one of those journeymen, all right! And he does a fine job on this movie, which I guess you might call a sort of film noir, although it was shot in rich, three-strip Technicolor by the marvelous Joe "Bigger Than Life" MacDonald!
I didn’t know much about this one before watching it, except that Marilyn Monroe was in it! And indeed she is, but she’s not really the star! Except of course she is the star; how could she not be? She looks stunning here of course, and her performance as a lady unhappily married to Joseph Cotten, is solid enough to transcend her status as an icon!
Monroe and Cotten are staying at the Rainbow Falls Motel, one of those places Humbert and Lolita might have stayed in on their own trek through America! Except the Rainbow Falls Motel is in Canada, and most of the action takes place there, or in a tower near the bridge across the river, or in those tunnels and balconies that surround the Canadian falls! The unplaceable accents of the police who investigate the goings-on mark them as Canadian, ha ha!
And just what are these goings-on? Well, at the same motel as Monroe and Cotten are a sensible young wife and her dope of a husband, who get mixed up in the other couple’s drama, realizing that Monroe is having an affair with some other fellow; and we viewers learn that Monroe and her boyfriend are planning to get rid of Cotten by bopping him and tossing him into the cataract! A bell tower playing a certain tune will indicate that the plan has come off, but in fact everything goes sideways, and matters come to a head with Cotton and the young wife heading to their doom over the great falls themselves!
Ha ha, it’s all very Hitchcock, and one can imagine old Sir Alfred having a crack at this story! But he’d have added some wrinkles to it, a few extra suspense setpieces, more detecting from the detective, and more humour! As it is, there are some marvelous moments, like the bell tower murder and the final scene at the falls! Unfortunately there are no scenes at the Niagara Falls Museum, which I once toured, finding oddities like a Zulu warrior accouterment called “Penus Cover” and a fierce, towering stuffed bear with a little card in front of him reading “Grizzle Bear - He Killed Six Men!” Ha ha, the museum is now gone, and its collection in the hands of a Toronto millionaire’s estate, but I’d like to have seen it on film, that’s for sure!
Anyway, Niagara was great fun, if occasionally stagy (some of the dialogue scenes in the motel rooms go on a bit long) and not always up to the full potential of the story! It’s great to see this tourist mecca the way it was in the 1950s, before the hotel towers and the sketchy attractions! I recommend a viewing of Niagara, and I give it two and a half records crumbled up in anger!
Posted by Burl at 00:56