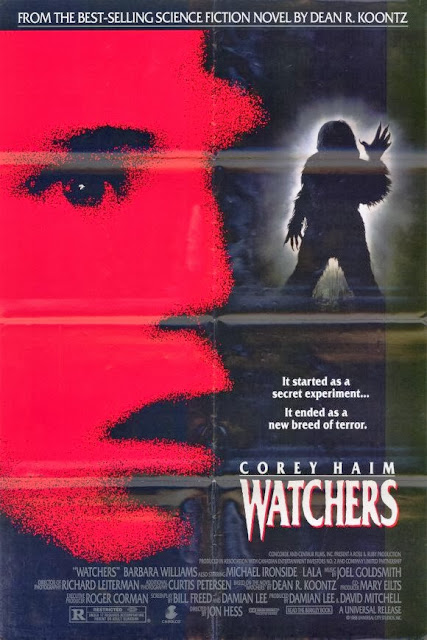 Hi, Burl here, and today I’m taking a walk on the iron side! Yes, Michael "Total Recall" Ironside is in this picture, and as usual he’s playing a nasty fellow on the wrong side of the law, totally bereft of any common decency! Ha ha, he’s so good at playing those guys that I sometimes wonder if he ever regrets being born with a bald head and a hawk face! But I guess he’s made a few bucks off it, ha ha!
This picture is called Watchers, and it’s the story of a lab that suddenly blows up and of the experimental creatures which escape the conflagration! One of them is a hyper-intelligent golden retriever and the other is a hairy humanoid monster with an ape face, a jaws mouth and a taste for human eyeballs! There’s yet a third escaped creature, but to explain that one would be to give away important third-act story points! Oh okay, the third lab creation is Ironside, who’s been genetically monkeyed with to be crazy and have no conscience! But we knew that already because, Ironside!
The dog hooks up with Corey Haim, of all people, the fellow from The Lost Boys, Secret Admirer and Silver Bullet; and he might have been able to live out his doggy life free and easy from there, but for the fact that the ape creature has been trained to kill this particular hound – it’s some sort of experimental weapons system, or some bunkum and honeydew of that sort – and also that he’s being chased by the ruthless Mr. Ironside! Corey Haim dubs the dog “Furface,” and there are many scenes of the dog showing off his incredible intelligence and trying to convince Haim and his mother that danger lurks nearby!
Of course the ape creature, who is somehow able to stroll through suburban neighborhoods and high school hallways without being noticed, is, in a series of unexcitingly-filmed killing scenes, brutalizing people in the area and stealing their eyeballs! A pot-smoking hobo, a janitor, an Australian appliance repairman (if you know what I mean, ha ha!), a computer teacher, a deputy, Jason Priestly – everyone is fair game to this voracious monster! Finally Haim gets the message that he and his single mom might be in jeopardy, so he beats feet up to a cabin in the woods where he and his pops used to go hunting!
Meanwhile Michael Ironside is causing his own havoc, and when people get in his way he just kills them and plucks out their eyeballs so people will assume the monster did it! Ha ha, very clever, Ironside! It all comes to a fiery climax at the cabin, with everything taking place pretty much as you expect it will; except that in a quiet moment before the final donnybrook the dog challenges Corey Haim to a game of Scrabble; it’s left to us to decide who would have won!
This is not a good picture! It’s a real daffodil: never scary or exciting, and there’s no character to root for aside from maybe the dog, and even he’s not that sympathetic because he just gloms onto people even knowing he’s putting them in danger by doing so! But he’s still by far the most sympathetic character in the movie! The monster is pretty much a particularly vicious Bigfoot, and it’s never explained why he likes eyeballs so much!
Ahh, I hate to sound overly judgmental, but this movie’s not really worth a cruickshank! Because I like Ironside, and because the mom was a little weird, and because after all it’s a little bit Bigfooty, and you know how much I love Bigfoot, ha ha, I guess I can muster up one half of a curiously flammable video cassette for this bumkin of a picture!
Posted by Burl at 09:46