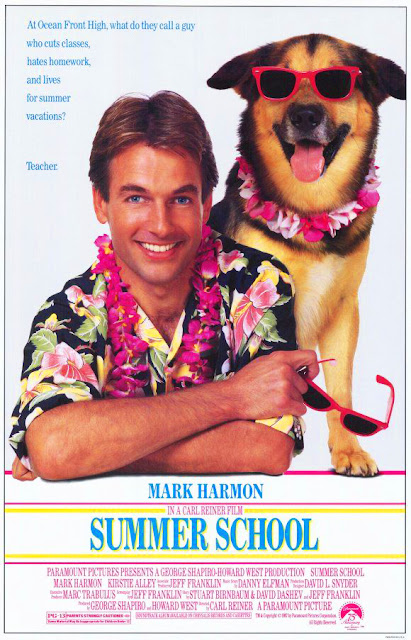 Ha ha, class is in session! Professor Burl here! Yes, here I am reviewing a movie that’s both a summer picture and a school picture! Ha ha, how can that be, you say! Well, this little balfour from 1987 happens to be called Summer School!
I hear you ask “Burl, is it really a balfour?” It’s my sorry duty to report that yes, it is! But it’s a balfour beloved by many, so we ought to give it the proper consideration and whatever dues it’s owed!
Now so far as I can tell, those who love this movie love it for one reason: Chainsaw and Dave! And though these two spend ninety-five percent of their screen time being complete jerks, they nearly redeem themselves as characters thanks to their big scene at the end!
But here I am getting ahead of myself again! Summer School tells the simple story of a layabout gym teacher played by Mark Harmon, the television doctor, who is gang pressed into teaching remedial English to a bunch of misfits over the summer! He gains a fast affection for another teacher, Kirstie Alley from Star Trek II: The Wrath of Khan! And the bad guy is her boyfriend, the school’s slimy vice-principal well played by Robin Thomas from Pacific Rim! Ha ha, this fellow Thomas does the 80s bad guy thing to a tee here, so I wonder why he didn’t do more of them! He could have given William Atherton and Paul Gleason both a run for their money!
Much screen time is given over to Harmon’s bright-eyed lunkhead, Freddie Shoop! He’s pretty artificial, and occasionally deeply stupid, but an appealing character nonetheless! He’s mostly a non-entity, and when one of his students, in a fit of pique, snaps “I’ve stepped in deeper puddles,” you note the accuracy of the statement! The students all get their own little stories or personality bits, like the nerd, the pregnant girl, the dreamy surfer chick, and of course the drunken, loutish, idiotic horror fans Chainsaw and Dave! It all ends with the big test, naturally, and I have to say, it was refreshingly realistic that less than half of them actually passed it!
I consider it too bad that Chainsaw and Dave are such unappealing characters, because it’s nice to have some horror movie fandom depicted in such an inessential, beachwear-coloured comedy as this! The boys do an oral report on Rick Baker, the trick-effects wizard of An American Werewolf in London; they screen The Texas Chainsaw Massacre for their classmates; and in a spectacular finale they make everyone up in gruesome casualty makeups in order to scare off a substitute teacher! To add to the horror vibe, many of the actors are best known from the actual creepshows they were in, like Shawnee Smith from The Blob, Dean Cameron from Bad Dreams, Ken Olandt from Leprechaun and Kelly Jo Minter from The Lost Boys! And then there’s Gary Riley from Ruthless People, which is not a horror movie but that’s okay!
The movie comes from Carl Reiner, who of course brought us movies like All of Me and another summer picture, Summer Rental! Even though he appears early in it as the teacher who wins the lottery, his heart doesn’t seem to have been entirely in the movie, because for the most part, it’s pretty bland! Only the horror stuff enlivens it; otherwise, like Pieces, it’s exactly what you think it is! Maybe the worst thing is that Freddy Shoop lives in a beach house and there’s barely any beach house atmosphere at all! Ahh, I give Summer School one vomiting nerd!
Posted by Burl at 17:19