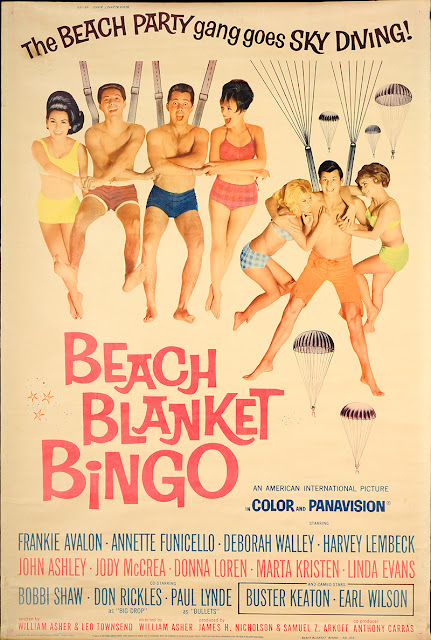 Hey hodads, it’s Burl, here to review one of the A.I.P. beach party pictures from well back when! This one is Beach Blanket Bingo, which I think may have been the third in the series! Ha ha, it’s hard to tell, because they really cranked ‘em out around that time! And it wasn’t just A.I.P., but you had things like The Girls on the Beach, Ride the Wild Surf, Beach Ball, and so many others!
This one has the same plot as all the others: a beach full of kids on vacation, with Frankie and Annette holding hands and singing to each other on the beach, but they have the same old problems as ever! Annette thinks Frankie should grow up, and Frankie thinks Annette is a bit of a fuddy-duddy! Plus they both become interested in other people, namely skydiving instructors played by Deborah Walley and John Ashley!
Meanwhile there are other things occupying the beach gang! Bonehead (who until this picture had been called Deadhead), the size-tall lummox, falls in love with a girl from the sea who turns out to be a mermaid! This affair du coeur is followed in great detail, installing itself as the emotional backbone of the whole picture! Meanwhile there’s a pop singer called Miss Sugar Kane whose publicist, Paul Lynde, is thinking up big publicity stunts for her to do; and these stunts involve a skydiving school run by Don Rickles (well known from Innocent Blood, but approximately the last person I’d want to learn skydiving from) and the gang itself, when they too become interested in both skydiving and Miss Sugar Kane! In the background of all this lurks Buster Keaton, stonefacing with a lady in a fur bikini, dancing, and even getting into a fight!
But then, unfortunately, come regular doses of Erik Von Zipper! This is the idiot biker character played by Harvey Lembeck in a manner suggesting Morty Tashman from The Errand Boy became a biker! Ha ha, thankfully he spends at least some of his screen time playing pool with Timothy Carey (from Echo Park), in a performance that’s weird even for Timothy Carey, as a pool shark called South Dakota Slim! Slim stands there glaring over his surroundings with an imperious, squinty gaze, waiting his turn to make a shot, calling everybody “bubby!”
Boy, sorry Harvey, ha ha, but I sure hate Von Zipper! If I ever decided to make a list of my most to least favourite Beach Party movies (I never will), the top entry would be whichever one had the least Von Zipper! I find the Von Zipper character and all his scenes desperately unfunny, and ha ha, regrettably this one is very heavy on the Von Zipper! He falls in love with Miss Sugar Kane, and, to show his devotion, kidnaps her and takes her to the gang’s clubhouse, where she too will know the pleasure of playing pool with Timothy Carey!
Carey, the great fartiste, kidnaps the singer in his turn, announcing his intention to take her to his bubby house! Ha ha, Carey turns out to be a crazed psychotic who lives in a sawmill - his bubby house - and proposes to tie Miss Sugar Kane to a log and cut her in half! Apparently still intending to cut her in half at some later date, Carey instead spirits her to an upstairs room, where he cries “I’m gonna give ya some en-ta-tain-ment!” and starts shivering so violently that the still bound actress hops away from him in what appears to be genuine alarm! This part alone makes all the Von Zipper stuff worth wading through, because South Dakota Slim is a monstrous and memorable creation, sort of a Hannibal Lecter of the mid-60s!
There are a few lively beach tunes, some okay gags, and some nice work from Buster Keaton, who is a performer I think everyone adores! The mermaid stuff is stupid but tolerable, the Frankie and Annette scenes half-baked, and the picture as a whole seems to go on for a very long time! But how deeply can you dislike a movie that ends with Buster Keaton being covered in kisses? Ha ha, I give Beach Blanket Bingo two bisected bikers!
Posted by Burl at 01:03