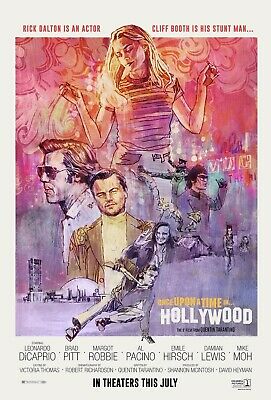 Ha ha and Dykstraflex, it’s Burl, here to review a new picture from Quentin Tarantino, who brought us Django Unchained and a number of other pictures! Now he’s got a movie about Hollywood at the hard fall the 1960s! It’s a fable, and by this time in our culture it’s a fairy tale, and so it’s called Once Upon A Time… In Hollywood!
It’s a simple and quite sweet movie! It’s about Hollywood and the 1960s, yes, and it’s a little bit about Charles Manson and his family of kookoo nuggets, and it’s almost about their crime, but really it’s a portrait of male friendship and the loss of puissance! (Ha ha, as if to discourage Freudian takes on that, or hook it up to simple aging, the only man explicitly stated to be having sex in the movie is Bruce Dern, who must be a hundred and five by now!) As a sort of sideline, the movie shows us the process behind the transformation of a star into a character actor, and for those with any interest in this kind of career trajectory, it’s a fine old pumpernickel of a bonus!
In the story we mostly stick with either Rick Dalton, a TV star who has aged out of the roles that made him popular; or else Cliff Booth, Rick’s stunt double, dogsbody, and pal; or else, most often actually, both of them! Around them revolves a large cast, from celebrity lookalikes (the Steve McQueen suggests an uncanny melding of McQueen and Gene Wilder) to old ringers like Bruce Dern and Al Pacino and even Clu "Tapeheads" Gulager, to the younger actors who have real parts, like Margot Robie as Sharon Tate (who gets some nice moments watching herself in a Matt Helm picture) and Emile Hirch, who plays Sharon’s hairdresser pal Jay Sebring!
The picture winds pleasantly through the Hollywood Hills, spending time also in Musso & Frank’s (where I too have sat and listened to tales of Tinseltown’s underbelly while drinking whiskey sours, and had to leave through the back door because in front the cops had shot some poor addled street person waving a Swiss army knife around!) and along the Sunset Strip (though I was surprised none of the characters went to any clubs!), and Cliff, played by Brad Pitt, even drives along Yucca once, with the 7-11 visible in the background, past the building where Ed Wood lived out his declining years!
Of the climax of the picture, which involves a home invasion by the Manson gang, I will say nothing, except that it doesn’t go down exactly like you read in the papers, ha ha! There’s something about the wish-fulfillment aspect of it that doesn’t quite sit right; also the merciless violence of it; but on the other hand it’s a fine wish, and it’s a lot of fun to watch in an animal brain sort of way!
The picture has many entertaining digressions, a ton of beguiling period details, and is pure joy for the movie lover! The visual effects by none other than John Dykstra are seamless and superb! Brad Pitt’s character is a bit of a black hole, but he’s an amiable one, and Leonardo Di Caprio, in the role of Rick, cries a lot! I thoroughly recommend Once Upon A Time… In Hollywood, and give it the three Georges, Peppard, Maharis and Chikaris! Ha ha!
Posted by Burl at 08:12

Email ThisBlogThis!Share to TwitterShare to FacebookShare to Pinterest
Labels: 21st century, drama, fantasy, movie about movies, saw it on the big screen, suspense