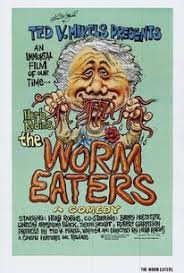 Haghh haghh, it’s Burl! Yuck, I’m here to review a movie about worm eating, and yes, it could only be called The Worm Eaters! And yes, it’s about people eating worms! Oh, they gobble those vermiforms up with the greatest of gusto! Ha ha, and you can bet that it’s as gross as it sounds!
It seems there’s a small town in California, and there lives a clubfooted German eccentric named Herman Umgar, who runs a grimy restaurant, who keeps worms and has special names for them all, and who has built a little castle for them all to live in! He sure does love his worms! Though they patronize his restaurant, the townsfolk don't like Umgar very much, and the evil mayor is trying to steal the deed to Umgar’s land, which includes a lake near which three fisherman had something strange happen to them at the beginning of the picture! We also learn that the mayor had at some earlier point killed the wormkeeper’s father and buried him in concrete!
Well, in his slow-witted, weirdo, vaudeville way, Umgar seeks revenge! He discovers that if he feeds his worms to the townspeople at his horrible little restaurant, they will turn into wormpeople themselves! Ha ha! After they gobble on worms for a while, the victims begin to cough and choke like they’re hacking up a hairball; then they emit paste; and finally their lower halves become slimy, segmented worm bodies, and they crawl around on their bellies making yick-yack sounds! Umgar’s victims include all manner of townies, perhaps most memorably two girls obsessed with hot dogs! Well, they get their hot dogs, but not without a little extra protein added in, ha ha! By the end, of course, Umgar himself is a worm, and he becomes the victim of the three fishermen, who catch him with a hook tossed out from the lake!
If you like gross close-ups of people’s mouths as they suck up and chew on worms, this is the picture for you! It’s one of those movies that seem to have been made by an experimental theater company on their dark days, much like Futz or Godmonster of Indian Flats! Really though, it seems largely the creation of a guy named Herb Robins, well known from his appearance in The Funhouse, who wrote and directed the picture, plays the part of Umgar, and happened to know a lot of people who didn’t mind eating worms! The movie was produced by, of all people, Ted V. Mikels, a bare-chested satyr of a man who lived in a small castle near Las Vegas and kept multiple wives!
The movie has long, boring stretches with Umgar soliloquizing and/or talking to his worms, scenes I suppose Robins thought were amusing, but which really aren’t! The vermipeople in their rubber segmented bodies are pretty entertaining though, and there are some performances (the head fisherman, the mayor, a black woman who is far and away the most intelligent and likable person in the picture) that are quite splendid! Other actors ham it up terribly - you’d see more convincing performances at your local fringe festival! The bottom line, though, is there’s an awful lot of worm eating to suffer though here, and I confess I wasn’t equal to the task! I had to look away several times, just as I had to press mute on the movie’s insufferable theme song, which occurs over the opening titles, the closing titles, and once, in a vastly overextended form, during the body of the picture! Like me, by the time you get to that point in the film you’ll probably wish someone would sneak up behind you and press a chloroform rag over your face! Ha ha, I give The Worm Eaters two hell of a lakes!
Posted by Burl at 09:43