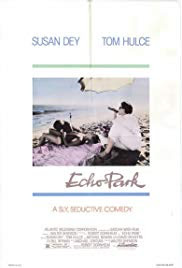 Welcome, friends, welcome to my neighbourhood! Yes, it’s Burl, here to review a picture that fits into a few subgenres! Ha ha, it’s called Echo Park, and, set as it is in that patch of Los Angeles by the same name, it’s one of those movies named for and defined by the neighbourhood, or district, or borough, in which their action takes place! I suppose Wicker Park, A Bronx Tale, City Island and many others would fit into this loose category!
Another subgenre into which Echo Park fits is the Eccentric Dreamer movie! UFOria is one of those pictures, and Melvin and Howard is another! The director of this movie, Robert Dornhelm, made another Eccentric Dreamer picture too, Cold Feet, starring my buddy Tom Waits! Ha ha, I’ll have to review that one sometime!
The story concentrates on three properly eccentric inhabitants of Echo Park, which back in the mid-80s was a little more downmarket than it is now, ha ha! Susan Dey, the famous TV law-lady, is the single mother who works in a bar while dreaming of being a waitress! Tom Hulce, who was in Slam Dance (a combination Eccentric Dreamer film and crime picture, also emphatically set in L.A.), is the pizza man who delivers his pies in a car shaped like a neon piece of pizza, but dreams of being a songwriter, and of entering into a romantic relationship with Dey! And Michael Bowen from The Wild Life plays the pongid bodybuilder who lives in the other part of the house, an Austrian émigré who dreams of becoming the next Arnold and who quickly does enter into a relationship with Dey!
And these three interact in various ways, surrounded by friends and employers, and go through a series of small, episodic adventures! Dey becomes a singing strip-o-grammer, ha ha, and Hulce is punched on by bikers! Dey’s son changes his name from Henry to Hank, and Bowen plays a Viking in a deodorant commercial He’s later thrown out of the German embassy for trying too hard to meet his idol, Schwarzenegger! Hulce’s boss, played by the great fartiste Timothy Carey, from Beach Blanket Bingo and The Long Ride Home, dispenses pizza-based wisdom! A Burt Reynolds lookalike wanders around! And then everyone goes to the beach!
The supporting cast features plenty of Groundlings, like John Paragon in the role of Hugo, and Cassandra Peterson from Allan Quatermain and the Lost City of Gold! Ha ha, it’s a wonder Pee Wee doesn’t show up! Cheech Marin from Fatal Beauty makes a friendly appearance too, and gets the last word in a scene where Bowen goes nuts and can only be restrained by other bodybuilders! The saddest scene comes when Hulce, delivering pizza to a recording studio, is encouraged by the producers and musicians there to expand on one of his songs that he’s been absently singing, but he suffers nerves, and flees!
It’s a nice, enjoyable movie, with a fairly realistic indie-picture magic realism and a peculiarly 80s indie vibe! The acting is pretty good, and it looks very nice and very L.A. and very 80s, but it suffers at times from contrived situations, sitcom logic, and Bowen’s occasionally shaky Austrian accent! (Why couldn’t they find an Austrian to play the part? It was an Austrian production, after all!) It all ends somewhat inconclusively, which I like, but the version I watched included an extended ending in which the main cast all stand on top of an Austrian mountain, sniff eidelweiss and do handstands! This did not provide clarity, ha ha, but it did provide scenery! And I suppose it also satisfied the Austrian funding bodies who helped finance the picture!
Anyway, I give Echo Park two and a half bum-cakes! Ha ha! You won’t want to miss that bum-cake!
Posted by Burl at 16:52