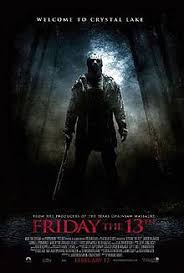 Chuff-chuff-chuff, por-por-por, ha-ha-ha, it’s Burl, here to review a Friday the 13th picture! But not any old Friday the 13th picture; no, this is the attempt they made about a decade ago to bring Jason and his antics into the new century, to make his slicings, his dicings and his pokings relevant to a new generation of thrill seekers!
It’s called simply Friday the 13th, but it’s not exactly a remake of the 1980 Friday the 13th, just another variation on the theme! It plays, I guess, like Friday the 13th part 2 would have if they’d tried (pointlessly) to inject more logic into the saga instead of bringing in a long-dead character and putting a bag over his head! But of course they sacrifice different logic in doing so!
It opens with a restaging of the original picture’s climax, with Mrs. Voorhees catching a head-chop from a surviving girl! But her severed head instructs Jason to Kill For Mommy; and so if Mrs. Voorhees is issuing orders to her son, that means he didn’t drown, and she knows it; and if that’s the case, why was she taking out her revenge on these camp counselors? What’s everybody so mad about? Ha ha, who knows, and who cares!
This picture has a very long pre-title sequence involving the demise of a whole group of college-age kids, of the type you’d never want to hang out with in real life! They are quickly gotten rid of by a ragheaded Jason, whose methods have become more sadistic than they used to be! No longer for him the simple poking, but now a slow campfire roast in a sleeping bag, or a bear trap to the leg! But of course one of the girls resembles Mother, and so as the picture wears on we can be assured of the same gambit used in part 2, and also of course in Humongous!
Finally we meet a whole new gang of teens, a completely unlikely group of pals, and most of them boneheaded jerks! They’re spending the weekend at the remote country house of the biggest jerk of them all, a shrill, possessive colungus who’s constantly remonstrating with his guests about scuffed tables and spilled beer! There’s also a character imported whole from Friday the 13th part 4, the handsome backpacker searching for his missing sister! But where the heck is Crazy Ralph?
While there are a couple of nicely set-up moments, like one involving a shower curtain, the movie is on the whole remarkably free of tension or frights! It’s clearly trying for an intensity never reached by the older episodes, but doesn’t manage any better! There’s a flatness to the whole enterprise; while the poking scenes come with a bran-fuelled regularity, the rollercoaster momentum the movie wishes to have never gets going! If the movie hits a sweet spot, it’s in the meatiness of its killings, which are gory but not excessively or cartoonishly so!
Jason’s lair, which is somewhere beneath Camp Crystal Lake, or maybe underneath his old house, features trophies from his past adventures in killing! This would be a nice touch if it weren’t so obviously, well, obvious! Better the energy should be spent on creating real characters to murder, or actual suspense, dread or terror in the execution of said murders! It’s altogether a pretty tired enterprise, filled with terrible songs, and I can’t muster the energy to give this Friday the 13th more than one field of leafy greens!
Posted by Burl at 22:53