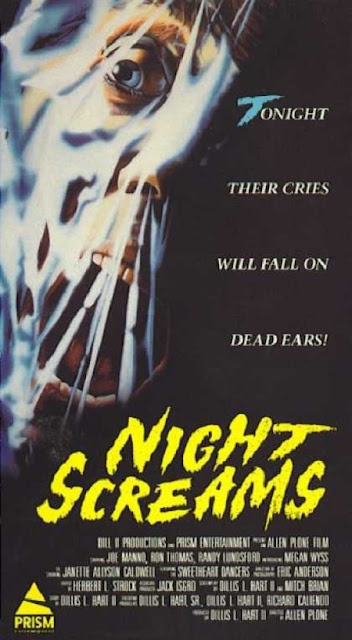 Burl here! Yes, I’ve got a mystery slasher for you today, a little-discussed cornelius out of Wichita, Kansas called Night Screams! Ha ha, and of course as a little public service I like to place these pictures into very specific categories so that the unwary watcher may become wary, or at least go into their viewing with a surfeit of information in hand!
One thing I like to let the people know is whether the movie in question contains any actual Special Makeup Effects in its killings or not! Ha ha, many a slasher pic skimps on this critical ingredient, relying instead on shots of poking knives and a few drops of stage blood! (The only movie that gets away clean with this approach is Halloween! Ha ha, and Psycho too, I suppose!)
Now, the funny thing is that Night Screams cheats a bit in this regard, because it opens with a couple sitting on their couch and enjoying a viewing of Graduation Day! We see a couple of killings from that picture, and the movie’s surprise ending is revealed, so fair warning if you haven’t seen Graduation Day! But it’s a sly way for Night Screams to fit a few more killings and a little extra tomato paste into its running time!
It’s an apt way to open the picture too, because Night Screams is very Graduation Day! The gang of superannuated sports teens we meet here are on the foot-ball team, or are girlfriends of the foot-ball team, and the action is centered on a big post-game party held for all these jerks by foot-ball hero David! But David wants no part of his BMOC status, though his bear of a dad revels in it by proxy, and we learn as the picture goes on that, without his special medication David is prone to fits of violence, and he’ll throw down a Cornish Hen flipout fit on his friends at the drop of a hat! His ladyfriend meanwhile feels that she doesn’t fit in, and at the same time all the girls are angling for a piece of David, who seems awfully Jersey Shore for a guy stuck in Wichita!
David’s not the only red herring here, to be sure! A religious maniac named Snake has broken out of Leavenworth, along with a couple of his pals, and they’re hiding in David’s basement! At the party, victims pile up: a fireplace poker through the sternum; a trouble light dropped into a hot tub; a neck crushed with a pool cue; a head chopped with an axe; a man’s face grilled alongside his own hamburger; and a few garden variety pokings and stranglings! (Of these, only the face-grilling and accompanying neck-poke required any substantial effort from the picture’s one-woman Special Makeup Effects team!)
As so often, it’s the marginal details that provide the most profound enjoyment! There is a pleasing entr’acte in which our victims-to-be go out to the club, where they observe the gyrations of six bespangled ladies called The Sweetheart Dancers! There’s a tubby jokester character straight out of Friday the 13th part 3, but this particular tubby jokester, called Russell, is given less to practical jokes and more to jarring bursts of bizarre behavior which the movie stops cold to observe! Are these incidents meant to be funny, or are they presented as evidence of incipient psychosis? Ha ha, the glory of Night Screams is that one simply cannot be sure!
The picture is never very scary, of course, though Snake demonstrates some admirably violent tendencies; and the solution to the mystery makes remarkably little sense, even for a movie like this! (Ha ha, this is yet another aspect it shares with Graduation Day!) The regional players, who include some almost-familiar faces like Ron Thomas from The Big Bet and Janette Caldwell from Body Double, do a competent enough job, and there are just enough flourishes of wit, bizarre moments, and uber-80s aspects (oh those Sweetheart Dancers!) to make it all worthwhile! I give Night Screams one and a half Yoda impressions!
Posted by Burl at 00:01