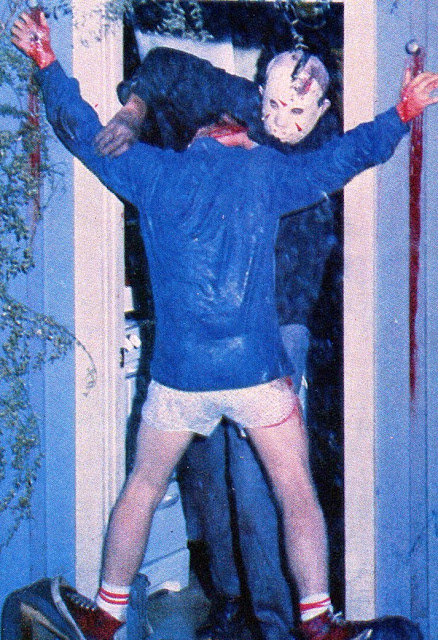 Hi, Burl here to look at another one of the famous killer Jason’s crazy machete-waving adventures! I’ve always thought of the Friday the 13th movies much the way many others think of the Star Trek pictures: namely that it’s the even-numbered ones that are better and more entertaining than the odd! I’m not what you’d call a great big fan of any of them really, but I’ll take II, IV and VI over I, III and V! (I haven’t really sat down and watched the ones after that, except for the one where he goes to hell and the one where he goes to space, both of which I saw in the theatre! But the one with the psychic girl, his grand trip to Manhattan/Vancouver and his match-up with the redoubtable Fred Krueger, along with whatever others there may be, have all passed me by!)
I watched the fourth one again the other day, because I recalled it somewhat fondly, and because Crispin Glover is in it, and, ha ha, he’s great in the picture! He brings a really welcome note of eccentricity to it, probably in spite of any direction he was given, and certainly in spite of anything in the script!
The story is pretty standard! There’s a family who live near Camp Crystal Lake: a single mother, her teenage daughter and her son, the monster-mad Corey Feldman! Also they have an amiable retriever dog, Gordon! Next door to them is a rental property that’s inhabited by a group of kids out for a wild time, and there is also a pair of comely twins who apparently live somewhere nearby! This, with a little skinny-dipping as a garnish, is precisely the formula needed to encourage the murderous rage of Jason! Although he doesn’t seem to need much encouragement, ha ha! 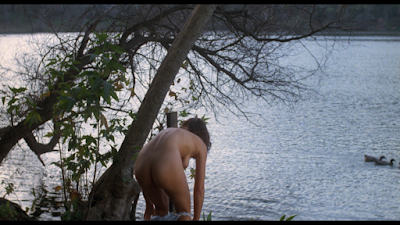 I think the filmmakers really did intend this to be the final chapter of the Friday the 13th story! Apparently the movie was originally going to end with Jason getting his head frizzle-fried in a sort of microwave oven contraption which Corey Feldman had created for some reason, but they scrapped that because it was too outside of the established M.O. of these movies! Ha ha, if only they could see into the future of the series, with the enraged ambulance driver and the psychic lady and the space stuff and the body-hopping and all that, they’d have known there was room to move with this formula! Anyway, they settled on the famous machete-slide for Jason’s demise, which was still supposed to be pretty final; but of course the picture made quite a few ducats, and they figured out a way to continue the movies anyway!
I still kind of like this movie, because it has Crispin Glover and his insane turkey dance - he's as funny here as in Rubin & Ed - along with some pretty tasty, if abbreviated, Tom Savini trick effects! It also has a few nice directorial flourishes, like the opening shot, which might be the single most ambitious shot of the series with its complex craning and tracking and lighting and choreography, and even a helicopter! On the downside, it has even less well-developed characters than most of these pictures, a dumb script, and The Last American Virgin, who is in the film as Crispin Glover’s “friend” Ted the Computer, and is a really annoying jackass! And can anyone tell me why Gordon the dog jumped out the window like that? And what happened to the mother? Ha ha, so many questions!
I give this picture one and a half lightning-quick haircuts!
Posted by Burl at 14:27