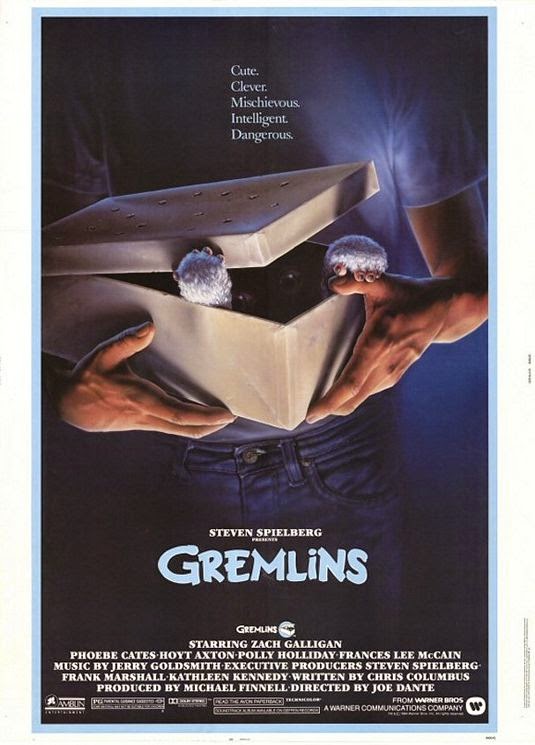 Doot-doot-doot-doo-doo-doo, it’s Burl here, humming Jerry Goldsmith’s marvelous theme from Gremlins! Yes, that’s the picture I’m reviewing for you now, because I just saw it very handsomely projected on 35mm film at a movie theater in Hollywood! And yes, in case you were wondering, Dick “Gunslinger” Miller was in attendance, ha ha!
Now, I hardly have to tell you the plot of this very famous 80s movie, do I! Well, for those who are not “hep,” here you are: an inventor finds a weird puppet creature in a Chinatown shop run by Keye “Dead Heat” Luke, and brings it home to his curly-haired manchild son Billy for a Christmas present! (Ha ha, yes, it’s an Xmas movie!) The creature, named Gizmo, is cute and sweet-natured enough, but spill some water on him (as Corey “Friday the 13th part 4”Feldman is quick to do), and mean versions of the little fellow pop out of his back! Then all you have to do is feed them after midnight and they turn into little dragon monsters: agent of chaos who turn the reasonably placid little backlot world of Kingston Falls into a nightmare puppetscape beyond comprehension! Now it’s up to Billy and his young l*dyfriend Kate to stop the menace any which way they can! Ha ha!
Now, after Piranha and The Howling and a short segment in Twilight Zone: The Movie, this was Joe Dante’s first adventure in big-ish budget Hollywood feature filmmaking, and he didn’t waste it! He was able to assemble one of his typically marvelous casts, sticking people like Harry Carey Jr. (from Exorcist III), Jackie  Joseph (from Get Crazy), Glynn Turman (from Out of Bounds), William Schallert (from The Man From Planet X) and Kenneth Tobey (from Strange Invaders) into the margins! Ha ha, Chuck Jones is in there too, as are many references to past Dante works! All of this helps give the picture a comfortably cinematic feeling, as opposed to anything approaching a realistic one; and this in turn helps Dante achieve that perfectly 80s humour/horror balance that led to the picture becoming so successful! (Ha ha, as we know an expensive and much-loved Gremlins 2 came along some years later!)
Other familiar faces include Judge “Beverly Hills Cop” Reinhold, Belinda “Matinee” Balaski, Jonathan “Armed and Dangerous” Banks and Robby the “Hollywood Boulevard” Robot! So the picture has that going for it, and that’s a lot! It’s an enjoyable romp, but clunkier than I remembered – the script, with its undercooked characterizations, seems patently from the hand of a first-timer, and it seems like it could have been scarier and more exciting than it actually is! But the kitchen scene with Billy’s mom, where she massacres the gremlins without pity or hesitation, is marvelous, and it still delights and mystifies me that the studio gatekeepers allowed Kate’s grisly, Gahan Wilson-inspired Christmas story to pass through unscathed!
It’s all very quaint now, but still nifty and enjoyable; and after all it gave Dante the career he’s enjoyed since, so we must grant it that! Plus: a substantial role for Dick Miller, which is a prize beyond value! I give Gremlins two and a half eerie Johnny Mathis Christmas carols!
Posted by Burl at 20:59