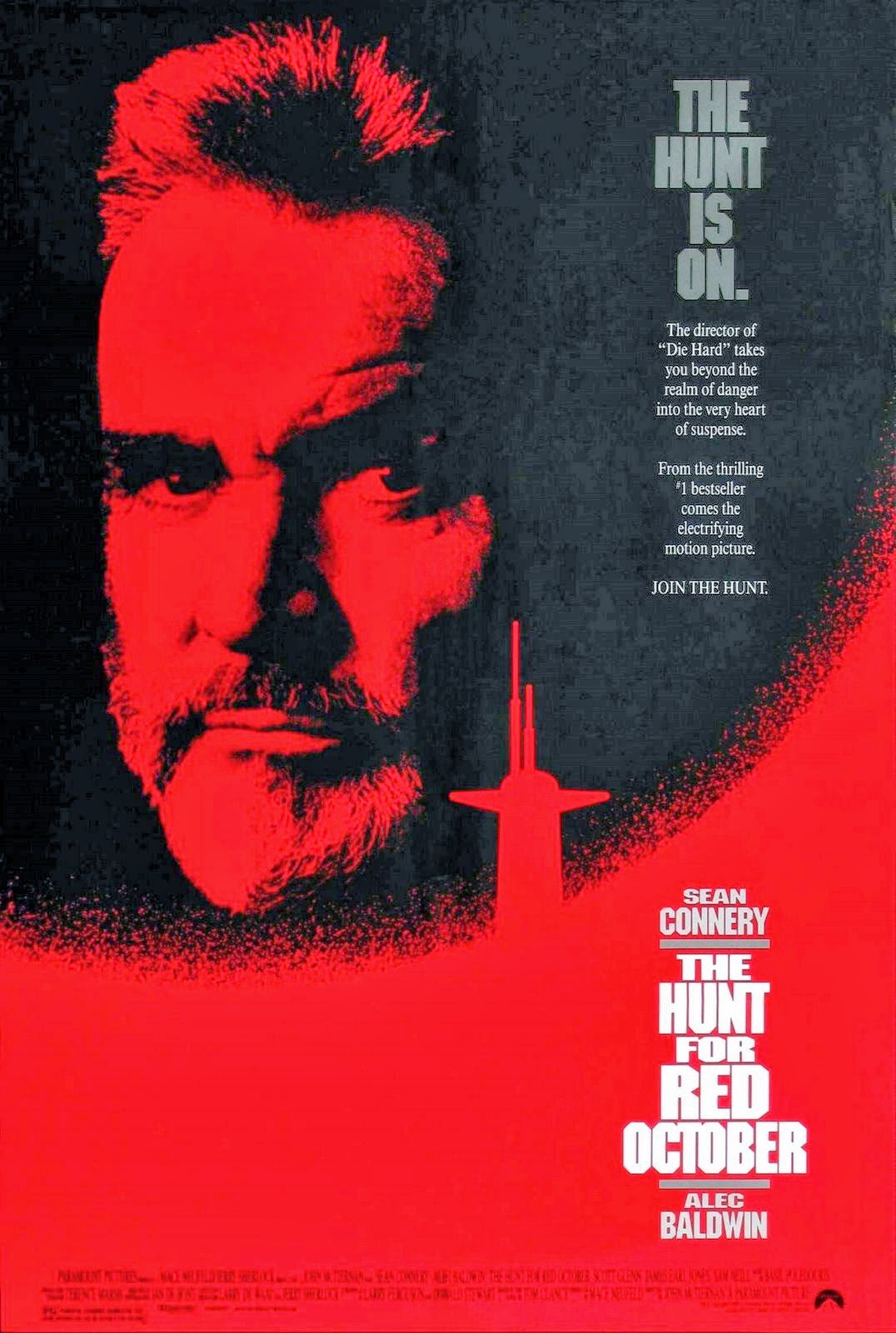 Ha ha, be glorious, our age-old motherland, it’s Burl! Yes, I’m here to review a submarine picture, The Hunt For Red October! Now, I like a submarine picture, don’t get me wrong, but I can’t say I like them as much as I thrill to a good dirigible movie! And I have a friend who counts submarine movies as his very favourite genre of them all, and so I have additional sympathy for them on that account!
This picture, based on the only Tom Clancy book I ever bothered to read – ha ha, flag-waving technothrillers are not so much my thing – begins with Soviet silver-fox sub driver Sean Connery guiding his new super-secret extra-fat submarine out into the sea with the intention of never taking it back! Marko Ramius is his name, and he wishes to defect, ha ha! (The whole movie, it should be noted, was a bit out of date geopolitically speaking by the time it came out in 1990!) His officers are of similar mind, so the only thing he’s got to do is evade the entire Soviet navy, ditch the crew and persuade the American he means them no harm!
And all the Americans do believe he means them harm except for one: Alec Baldwin! He plays a boffin called Jack Ryan who apparently has his PhD in Marko Ramius Studies! He also talks to himself a lot, which Baldwin sells as well as he can, but still comes off as a little silly! Anyway, there’s a long series of scenes in which Ryan tries to convince everyone from Admiral James Earl Jones (whom we recall from Conan the Barbarian) right through to sub captain Scott “The Keep” Glenn, and everybody in between!
This was John McTiernan’s next picture after Die Hard, so I remember going to see it in breathless anticipation of a thrilling action picture! It’s certainly not that, because model submarines just aren’t that exciting to watch! There’s a big explosion at the end, and a bit of a shootout too, but the movie is mostly lots of chatting! Still, it’s slickly done in the grand Hollywood style, so I won’t claim it’s not entertaining!
And as you know, I’m much more “ha ha” than “rah-rah,” so I was cheered to realize that, while the picture was certainly a grand celebration of all that was tough and manly about the military and intelligence forces, and of their hardware and their deep, abiding brotherhood, it was much less so, and much less stupidly so, than many other pictures! So it had that going for it! It’s still pretty kooky in parts, though!
The real attraction? Ha ha, that cast! You’ve got Connery and Baldwin, both solid, and Glenn and Jones giving fine support, and then other ringers like Sam “Jurassic Park III” Neill giving a touching performance as the Russian officer who only wants to live in Montana, and Peter “Lifeforce” Firth as a nasty Rooskie, and Joss Ackland and Courtney B. Vance and of course the Legend himself, Tim Curry! It’s a talented bunch, ha ha!
It tries very hard to make the situation as hair-raising and suspenseful as possible, but that means everything stops periodically so Jack Ryan can remind everyone of the dreadful stakes involved! This eventually begins to have the opposite effect of what is intended, and you’re left with a bunch of people standing around in an attractively-lit metal tube! Ha ha, it’s an okay Hollywood bunticulation, but on the whole I’m going to give The Hunt For Red October just one and a half caterpillar drives!
Posted by Burl at 12:22

Email ThisBlogThis!Share to TwitterShare to FacebookShare to Pinterest
Labels: 1990s, action, saw it on the big screen, submarine, suspense