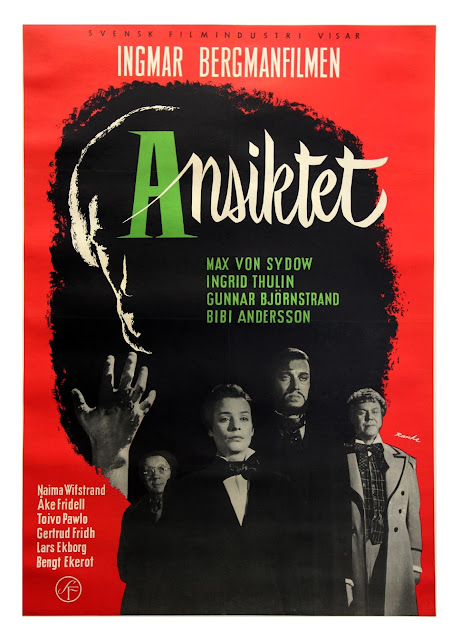 Hä hä, it is Bürl, here to review a movie made by the grand Ingmar Bergman, which I vaguely recall seeing thirty-plus years ago at an art gallery screening! Ha ha, old Ingmar always had a taste for the macabre, as demonstrated not just in outright horror pictures like Hour of the Wolf and The Serpent’s Egg, but in uncanny tales like The Virgin Spring (the inspiration for Last House on the Left, don’t forget!) and psychodramas like Persona and Cries and Whispers! And didn’t Wild Strawberries have a pretty creepy dream in it? Ha ha, it sure did!
Well, today I’m reviewing The Magician, and this picture has no shortage of horror tropes and atmospheres swirling through it! The whole opening, set in a carriage traveling through a spooky, supposedly ghost-infested forest, feels like something out of Bava’s Black Sunday! The carriage is that of Vogler, a mesmerist and magician played mutely by Max Von Sydow, and his crew of confederates! These include his young assistant, who is a lady pretending to be a man in the least convincing drag performance since Dragonslayer; the vulgar tout Tubal; the nervous young coachman Simson; a drunken, dying actor they find in the forest; and an old witch!
The gang is on the run from the law, we soon learn! Hunted as charlatans, mostly, we assume, because of the old lady’s potions which are worthless or even actively harmful, they’re moving on with all possible speed to a town in which they and their chicanery are yet unknown! But when they get to the town the authorities seem to be waiting for them, and a trio of local so-called worthies, including the magistrate, the head doctor and the police chief, proceed to humiliate Vogler and his troupe, demanding proof of their magical abilities and threatening them with consequences should they in fact prove able!
The picture then moves into a series of talk-heavy vignettes between the various characters as the troupe is ordered to stay the night at the magistrate’s large house, and the various servants, guests and inhabitants interact in variously spooky, romantic, dramatic and comic ways! And it’s no surprise when the supposed young man, Vogler’s companion, turns out to be a lady, and Vogler’s wife! Ha ha, no foolin’, it’s Thulin! Nor is it a shocker when we discover that Vogler’s beard is a fake! Comes the dawn and Vogler and his friends must figure out a way to take revenge for their mistreatment without being thrown in the pokey; and we, the viewers, find we have been treated to a discourse on degrees of truth and the values associated with them; on the contract between spectator and artist; on the value of art in the midst of existential crisis; and on moral culpability and the relativity of same!
Von Sydow, whom we know well not just from Bergman pictures, but from Bergmanesque pictures like Dune, Dreamscape, and Never Say Never Again, plays Vogler as though constantly in the grip of anguished rage! Every actor is solid in fact, especially those members of Bergman’s own regular troupe, like Erland Josephson, Bibi Andersson, and Ingrid Thulin! The photography by Bergman compatriot Gunnar Fischer, is velvet black and lustrous silver, and the low-key score is effective! Sure, the middle part of the picture is a little episodic, but it’s never dull, and the picture weaves its artificial sorcery as surely as Vogler does in performance with his magic lantern! The Magician is a terrific picture and I give it three unexpectedly happy endings!
Posted by Burl at 13:14