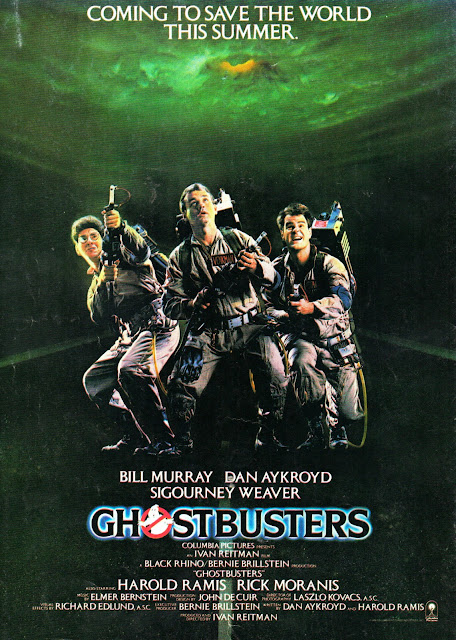 Hi, Burl here, reviewing another picture for you, simply because burlin’ makes me feel good! Ha ha! And today’s review, as you’ve no doubt guessed from my reference, is the big-budget comedy escapade Ghostbusters, wherein three men and a fourth man chase, trap and bust the ghosts who are plaguing New York City! Ha ha, it comes from Ivan "Junior" Reitman, the director of Cannibal Girls!
Ha ha, I guess there’s no real need to go over the plot of Ghostbusters! I remember going to my neighbourhood cinema to see this picture one warm and sultry Sunday evening just as grade school was winding down for the year and final exams were beginning! I had to really plead with my parents to forego studying for a couple of hours! I really enjoyed it, and the upshot of the whole experience is that Ghostbusters has come to symbolize the beginning of summer for me, and that excellent tag line, “Coming To Save The World This Summer,” only backs the feeling up! This is why I’ve chosen to re-watch and review the picture for you now!
I have to say, as a breezy entertainment from Hollywood’s dream factory, it holds up very well! It’s still pretty funny, thanks mainly to a fine performance from Bill “Meatballs” Murray, and also some merry japery from the likes of Aykroyd, Ramis and Moranis! All the acting is pretty good, in fact, and Sigourney “Cabin in the Woods” Weaver makes a fine straightwoman! It would have been nice to see John Candy in there somewhere, but I guess you can’t have it all!
Of course Murray, well known as the brother to John “Moving Violations” Murray, epitomizes the 80s comedy hero, in that he’s a wisenheimer who does the right thing, but isn’t actually very likeable! When he puts the moves on Weaver and she says he seems less like a scientist and more like a game show host, you have to admit she’s absolutely right!
Another funny thing about this picture is that the EPA fellow is the bad guy! Sure, he’s played by William “Die Hard” Atherton, which automatically makes him a bad guy and a jerk, but when you get down to it, an EPA inspection of the Ghostbuster facilities is a pretty reasonable request, public safety and corporate oversight-wise; and, overlooking the fact for a moment that Atherton’s meddling hastens the third-act phasma libertas, the unregulated facility was, as indicated by the Twinkie analogy, a legitimate danger! And yet, in what I suppose must have been a reflexive expression of Reagan-era attitudes, the EPA – created by Nixon, remember, ha ha – is presented as a bunch of literally impotent crackernacks!
And then there’s Ernie Hudson, who does what he can with his role, but who nevertheless may as well have his picture in the dictionary under the “Token Black Guy” heading! He contributes a few lines here and there, and opens the possibility of an Old Testament reading of the antics, but contributes nothing to the actual narrative, which is itself a pretty weak concoction if you step back and think about it for more than a few seconds! Ha ha!
But it’s still somehow a fine picture, crammed full of top-flight trick effects and marvelous comedy performers! It’s also got a great score from Elmer Bernstein, and a number of mediocre pop songs! They made a sequel of course, and even though all the same people were involved, it was terrible! It makes the original look all that much better! I’m going to give Ghostbusters three flowers that are still standing!
Posted by Burl at 22:43

Email ThisBlogThis!Share to TwitterShare to FacebookShare to Pinterest
Labels: 1980s, comedy, ghost, saw it on the big screen, scientist, supernatural