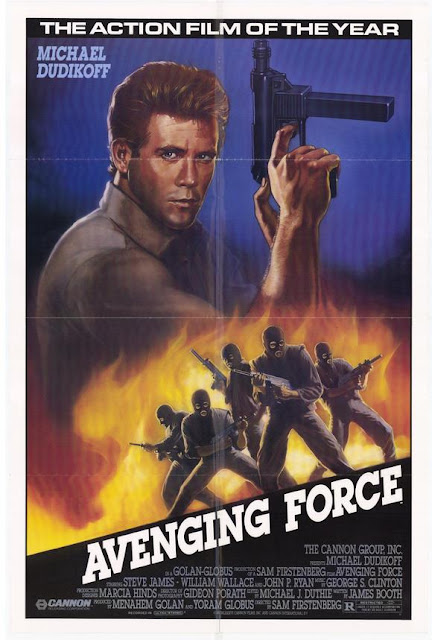 Oh-ho-ho, it’s Burl, here with a little 80s action for you! Ha ha, you really do come across some little gems while trolling that particular pond, and Avenging Force, while hardly perfect, qualifies as one of them!
Scuttlebutt tells us this was originally meant to be a sequel to Invasion U.S.A., that picture about Chuck Norris taking on all the bad guys with his blazing twin Uzis! Ha ha, a ridiculous movie, really, but charming in its own brutal, blockheaded way! But old Chuck declined to take part in this one, either because his schedule didn’t permit it or because its politics weren’t to his taste!
Because, like Malone and Day of the Survivalist, the bad guys are right-wing, racist, popgun-loving survivalists! I’m not suggesting Chuck is a racist, ha ha, but these are otherwise guys he’d probably rather have a beer with than a battle! So Norris was out but Michael Dudikoff, known for his roles in Tron and Olympus Has Fallen, was in, though the character name, Matt Hunter, stayed the same!
I’m glad they changed the actor and not the script, because frankly I always like pictures in which quasi-fascist buffoons are punched, chopped, impaled and shot! It’s pretty darn satisfying, ha ha, and timely too, for as I write this, just such a group of nincompoops is in the news for taking over a wildlife refuge! Ha ha, terrific plan, fellows!
Anyway, the gang from Avenging Force is called The Pentangle, and they like to play dress up and hunt humans through the swamp! The leader, Professor Elliott Glastonbury, is played by John P. Ryan from Fatal Beauty, and you have to see his performance to believe it! Ha ha, suffice it to say that Ryan put a lot of mustard on this one! There are three other fellows in the gang, making the identity of the presumed fifth (since they’re called The Pentangle) a mystery, but not a very tough one! Even Dudikoff figures it out by the end!
Being loathsome racists, The Pentangle’s other favourite activity is attempting to assassinate black politicians, and the one here, played by Steve James from Mask and Weird Science, happens to be Matt Hunter’s best pal! James survives the attempt, but his family is not so lucky, and so the revenge battle is on! Nobody is safe in this picture, not kids or ladies or grandpas or just plain passers-by, and eventually it’s just Matt Hunter running through the swamps and doing battle with the loathsome Pentangle one by one!
Ha ha, let me tell you, it’s no easy task for young Hunter! He gets a sound punching from almost every member of The Pentangle, and that’s not even mentioning the crossbow bolt they put through his leg, which makes him, and a small rag dummy he’s carrying, fall off a roof! Yowch! But the upshot is this: if you like swamp fights, particularly ones involving people dressed as leather daddies, off-brand movie slashers, or sporting mime and fish masks, this is surely your picture!
It’s a bit overlong for a little action picture, but it’s feisty and, for its time, pretty progressive! Dudikoff is a bit wooden and the young girl who plays his sister is – well, “not a very good actor” is probably the best way to describe her; but Steve James is certainly an appealing presence, and the bad guys are as hateful and as deserving of comeuppance as bad guys get! Ha ha, have a look at this forgotten mini-gem if you get the chance! I give Avenging Force two fish masks!
Posted by Burl at 16:03