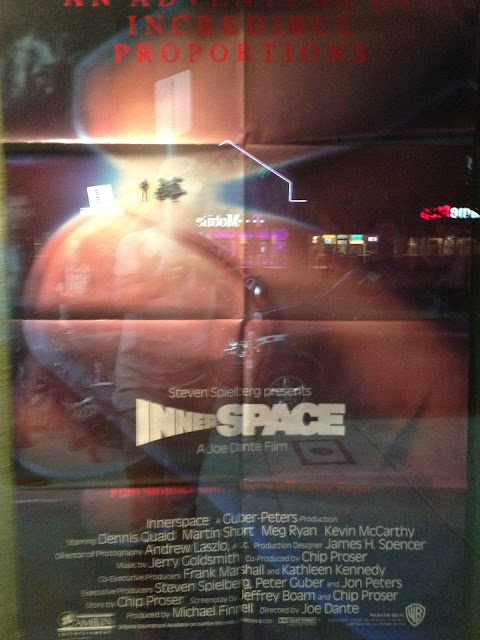 Ha ha, how would you like to enter the world of miniature people? I, Burl, will take you there today with my special review of Joe Dante’s picture Innerspace! That’s the one in which Dennis Quaid is rendered mini and injected into Martin Short’s bum! Yes, you know the movie I’m talking about!
Of course, like so many Dante pictures – Explorers, Matinee and Piranha among them! – Innerspace has a great cast! The principals are Hollywood types, but backing them up with great panache are thespians like Kevin McCarthy, Robert Picardo, Henry Gibson, Fiona Lewis, Vernon Welles, William Schallert and of course the legendary Dick Miller, well known from his roles in Sorority Girl, A Bucket of Blood and many other classics! And on top of all these folks, I think I saw Kenneth Tobey and Rance Howard lurking in the margins like Aragones doodles!
The plot is kind of nonsense, but I’ll tell it to you anyway! Dennis Quaid plays a guy named “Tuck,” a test pilot or something, who likes drinking a little too much for someone in his profession! He ends up part of a miniaturization experiment, but through a series of confusions finds himself within Martin Short (famous from his role in ¡Three Amigos!, of course!), and together this unlikely duo must outwit spies and criminals, and restore “Tuck” to his original stature! All of this takes 120 minutes, which seems a little overblown to me! I think they should have cut the whisky scene, myself, and maybe made Fiona Lewis and Kevin McCarthy into one character!
Well, that’s Monday morning quarterbacking for you! Ha ha, it doesn’t do much good now! So it’s true, the movie is a little too long for something so goofy and insubstantial! But as a special tribute to Fantastic Voyage, it’s not bad! There are a few funny moments scattered here and there, some impressive special effects and plenty of fine performances! All of these elements come together in such moments as the special-effects face changes, which are straight out of Looney Tunes!
There are a few other things I didn’t like about the picture, and a few other things I did, but I don’t want to just make a big list for you! Instead I’ll simply say that I give Innerspace two vibrating hands! Ha ha!
Posted by Burl at 03:50