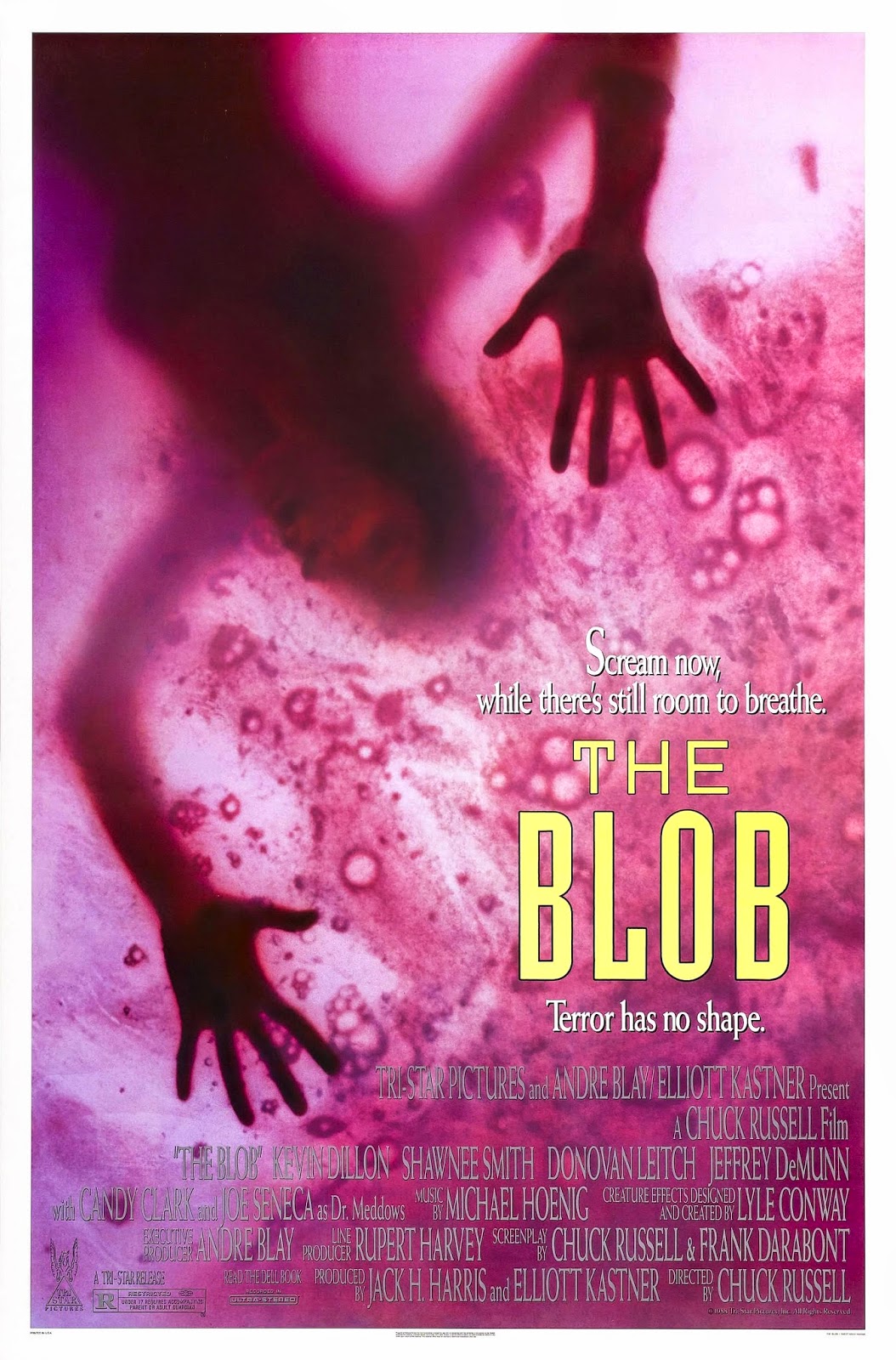 Blup blup, it’s Burl, here to review a very blobby picture: the 1988 remake of The Blob! Ha ha, I saw this one in the theatre when it was released in August of 1988, and to me it remains the quintessential Late Summer Horror Picture – the kind of movie you could count on seeing as the toasty months wane and school approaches! The tradition has slacked off in recent years, and I count that as a real shame!
Well, ha ha, it’s not the end of the world! But I sure enjoyed The Blob when I first saw it, to the point of including it in alongside The Thing ‘82, The Fly ‘86 and Invasion of the Body Snatchers ‘78 on the list of Remakes Which Justify The Practice; and a recent viewing confirms that it is indeed a pretty enjoyable film, if not on the level of those already-named remakes!
Like all good remakes, it makes One Big Change from its forbear! The Thing reclaimed the shapeshifting premise; The Fly made the metamorphosis gradual; Invasion changed the setting from a small town to a big city; and The Blob makes the titular creature not a random passer-by from space, but a man-made organism gone screwy from space bacteria or something! Ha ha, it’s a pretty good dramatization of the post-Iran Contra cultural cynicism, which itself was an echo of the post-Watergate cultural cynicism from a dozen years earlier!
Filmmaker Chuck “A Nightmare on Elm Street 3” Russell kept all the right things from the 1958 version of the story! We have a small town, a fiery meteor and a fatally curious stewbum (played by the grandpa from Moving Violations, Billy Beck) who figures “Somethin’ fell from space, better poke it with a stick!” The town of course includes a motorcycle hoodlum (Kevin Dillon, fresh from his travails in Remote Control), a cheerleader (Shawnee “Summer School” Smith) and a football hero (Donovan Jr., well known for Cutting Class), all of whom will encounter the pulsating pink menace!
The hoodlum and the hero are kind of like the two sides of Steve McQueen’s persona in the earlier movie, and the picture manages a nice surprise when it dispenses with one half of this dyad early in the action! Another new character is Dr. Meddows, the initially avuncular but ultimately evil government scientist! Ha ha, they really made a great decision in casting Joe “The Evil That Men Do” Seneca in this part, because it’s so unexpected! Also, he’s very good in the role!
The casting in general is strong: the great Del “Next of Kin” Close plays a reverend driven into an apocalyptic mania by his experience with the blob; Mittens himself, Art La Fleur from Cobra and Zone Troopers, plays a grumpy dad; Candy Clark from Q and Amityville 3-D is a sweet diner lady, and Jeffrey “The First Deadly Sin” DeMunn is the sheriff whose efforts to romance her would have been successful if not for that darn blob! Plus we get people like Jack “Dune” Nance and Beau “Star Trek Into Darkness” Billingslea in small roles, and Paul McCrane is once again reduced to a jelly, just like he was in Robocop!
The picture looks great, with soft pink photography from the portly cinematographer, Mark “Fast Company” Irwin; and the makeup trick effects are superb and frequently gory! The visual effects, however, are not so hot, and are at times on the level of the jam-on-a-picture-postcard effects of the original! Ha ha! Then you've got the physical blob itself, which does resemble a puppet, or at other times, a pile of giblets! Russell’s direction sets up some good stuff, but as often as not misses the opportunity for tasty suspense or scares! And the white shirt worn by Kevin Dillon? Ha ha, it’s horrendous!
Despite its flaws I remain fond of this picture, and although the older one is still scarier, I’ll go to bat for the remake any day! Ha ha, I give The Blob two and a half annoying movie theater talkers who get their comeuppance!
Posted by Burl at 11:58