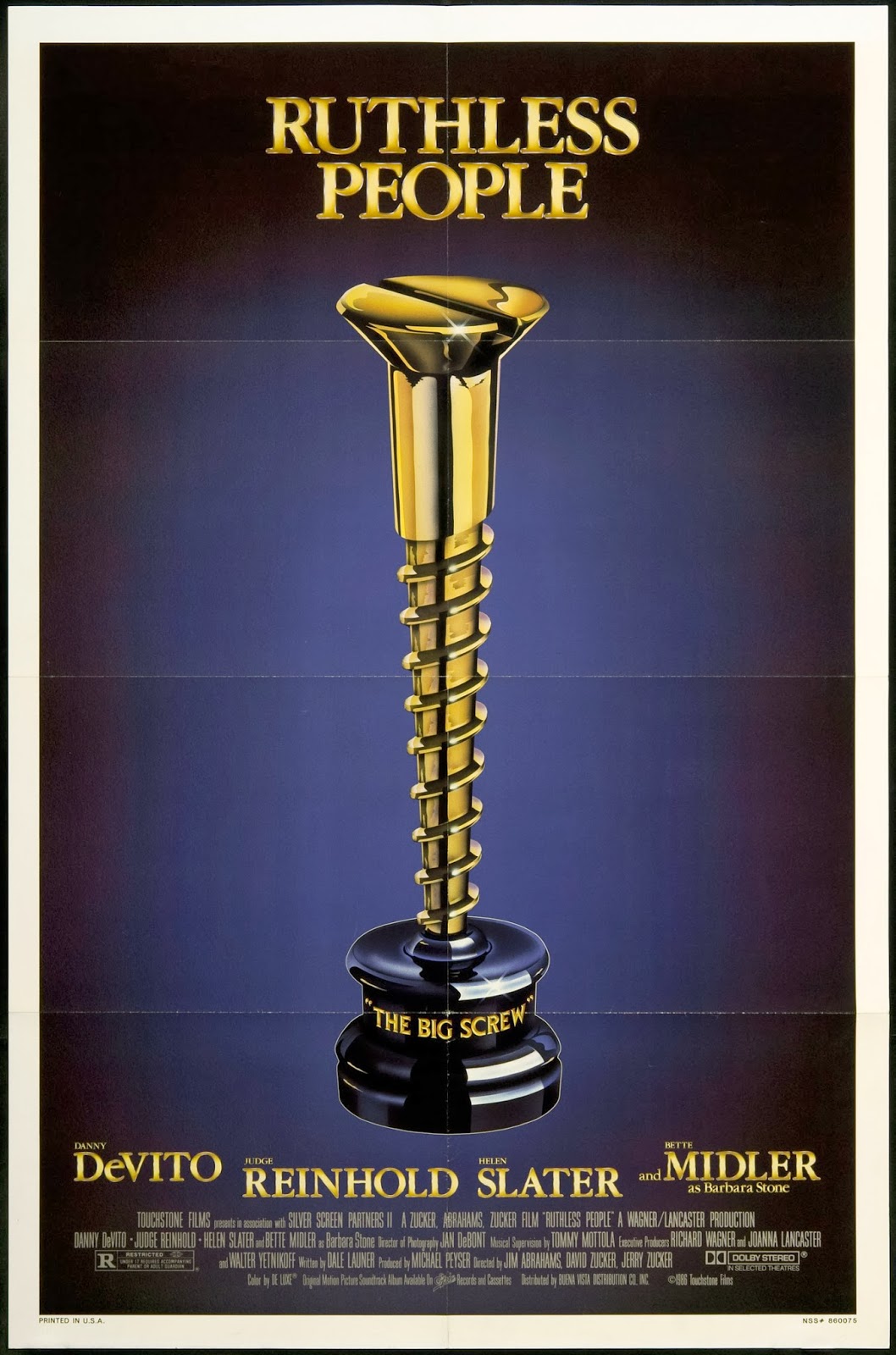 Ha ha and hello! It’s Burl here with yet another comedy from the 80s, like Armed and Dangerous or Funny Farm! Now, usually I watch these things because I’ve never seen them before, but in the case of Ruthless People, I couldn’t remember whether or not I’d ever watched it! Much of it seemed familiar, but that may simply have been because, well, much of it is familiar! Ha ha!
It’s one of those comedies where the laffs are meant to come from how horrible everyone is! The most horrible of the people here is Danny “The Van” DeVito, a rich clothing magnate who stole his most profitable idea from meek, mousy Supergirl! Ha ha, in response, Supergirl and her husband, Judge “Beverly Hills Cop” Reinhold, kidnap DeVito’s wife Bette Midler; but of course DeVito hates her and was planning to kill her anyway, so he looks on the kidnapping as a gift!
The picture settles into a cycle of misunderstanding which repeats itself and makes the movie seem much longer than it is! DeVito’s girlfriend, played by Anita Morris from Blue City, believes the kidnapping is a ruse and DeVito has gone through with the killing, which her own secret boyfriend, Bill Pullman of The Serpent and the Rainbow, witnesses, or at least thinks he does! Pullman’s character is the classic movie dum-dum, ha ha, and many of the jokes revolve around this!
The rest, as I say, revolve around DeVito’s amorality and Midler’s viciousness! For some reason during her kidnapping she embarks on a program of self-improvement, and eventually finds herself in league with Supergirl and the Judge! Art J. Evans, who plays a cop in every movie except when he played a st*ner in Class Reunion, plays a cop! He’s hot on various ever-mutating trails which lead, so he thinks, to a variety of crimes! William “The Island” Schilling meanwhile plays the chief of police, and Cheshire-grinned Gary Riley, known for The Wild Life and Stand By Me, plays a Heavy Metal Kid!
For a while the picture maintains a certain plausibility, of the type you might find in a twisty film noir! Soon, though, dopey plot developments – the police chief, the maniac – scupper any scrap of realism, and the movie pretty well goes out the window! It has a silly action-y climax, like all 80s comedies did, and then there’s a happy ending in which the sympathetic characters walk off down a beach into, more or less, the sunset!
This picture made itself a bit of a reputation on release because of the salty language and other R-rated shenanigans! That sets it apart, sort of, from the other movies like it, but nowadays, with foul tongues flapping all across movie and television screens, that mildly novel aspect is lost! There are some witty bits, and the performances are just fine all around, but there’s not much you can really point at and say “Ha ha, now this is why you should watch Ruthless People!” It’s streets ahead of something like Protocol, but that’s not saying much! So ol’ Burl is going to point at it and say “Ha ha, I give Ruthless People one and a half bedroom killers!"
Posted by Burl at 21:23