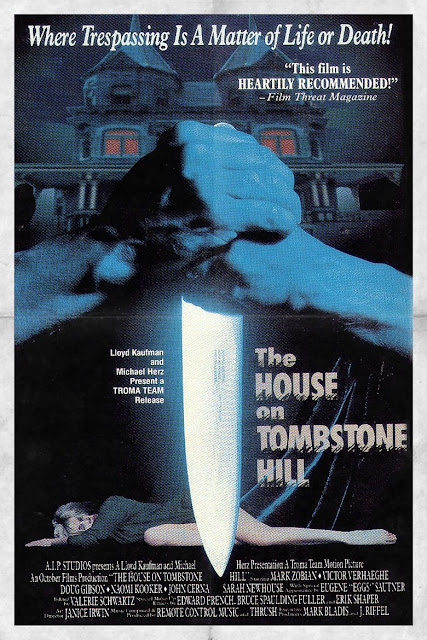 It’s Burl with another cheap horror movie for you! This one is called The House on Tombstone Hill, but it’s really called Dead Dudes in the House! Ha ha, but I’m going to call it The House on Tombstone Hill, simply because I much prefer that title!
Nevertheless, Dead Dudes in the House is a fairly accurate summation of the goings-on in this picture! One dude has bought himself an old house, and has somehow convinced a number of other dudes, along with two ladies, to come and help him fix the place up! But, ha ha, when the biggest jerk among the dudes breaks a small tombstone he finds outside the place, he awakens the spirit of a dude in old lady makeup, who I think was supposed to be an actual old lady, or anyway the ghost of one! Supernatural forces are truly at work here, ha ha! Quickly the doors close, the windows become unbreakable, the shutters flap shut, and all the dudes and dudettes are trapped in the house with the old manlady!
Well, the manlady gets to work, luring the dudes one by one down shadowy corridors or up rickety ladders, and when she gets them where she wants them, it’s time for sadism! Yes, she’s a particularly mean old slasher ghost, pinning down her victims with scratch awls, chopping off half their hands before spearing them with pipes, that sort of thing! Ha ha, thanks to the work of Ed French, who startled us also in C.H.U.D., Breeders and Creepshow 2, it gets pretty gory, and they really go the extra mile on the spurting blood in this picture!
More dudes show up, more or less randomly, and have their own encounters with the old manlady! Meanwhile her victims come back to life as murderous talking zombies, who are just as eager to kill the live dudes and dudettes as the old lady is! Like her, they seem imbued with a supernatural strength and resilience, but they are not invulnerable! Neither, as it turns out, is the old manlady, but she holds up pretty well!
The back half of this picture is a slightly repetitive series of fights between the dwindling gang and the ever-increasing cohort of zombies! Luckily the zombies never attack en masse; it would be a much shorter, but probably more thrilling, movie if they did! There is an awful lot of bopping and thwacking and biffing and clobbering, and one fellow carries a four wood around with him as his weapon! Ha ha, I guess they are after all a pretty preppie bunch of dudes!
The picture proceeds with the teensiest amount of wit and a ha’penny’s worth of style, but that’s still more than I was expecting, and is enough to set it apart from other cheapie scare pictures! The location they used was pretty good too - the house is big enough and old enough and ugly enough to make itself a character, though every room on the inside looks alike, which contributes to the decidedly repetitive nature of the film! But we feel trapped in there as much as the characters do, and when one of the sash windows does finally open, we know, having seen Superstition and The Boogey Man, that one shouldn’t linger half in and half out of a haunted house window! Ha ha, the window gets tired of the guy’s dawdling and simply eats him!
It’s got some entertainment value, and the old manlady, as relentless as the Terminator, is a daunting creation! For punching above its weight, even if slightly, I give The House on Tombstone Hill two homemade saw blade knives!
Posted by Burl at 15:39