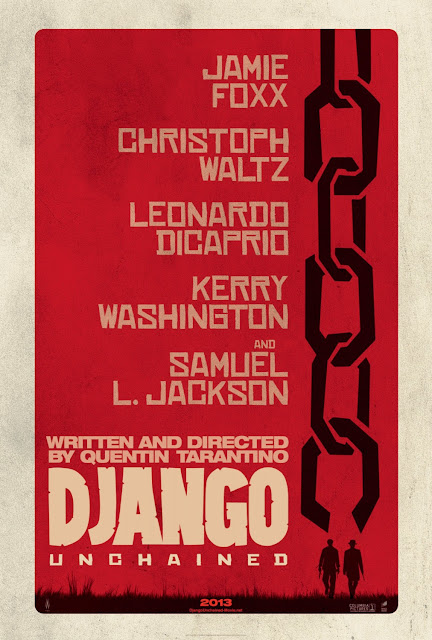 Yoplait, friends, it’s Burl here again with a movie review! It’s a newer movie: a Quentin Tarant*no picture called Django Unchained! Ha ha, it’s another high-camp genre story, and a bit of revisionist revenge history along the line of his previous picture, Inglourious Basterds!
This one starts with a meeting between Django, a slave in the antebellum South, and a German dentist/bounty hunter, Dr. King Schultz! Dr. King deplores slavery in a very 21st century manner, and he frees Django post-haste and enlists him to help with his bounty hunting activities, as tooth-pulling and cavity-filling are things of the past for this Teutonic gunman, despite the big bobbling tooth atop his wagon! Pretty soon they’re on their way to Candieland, a plantation run by Leonardo DiCaprio, to rescue Django’s wife! Ha ha, there’s brutality galore, in both the form of horrible violence against the slaves, and cartoonish gunfights in which, as in Robocop, great geysers of blood and steak-sized chunks of meat come fountaining out of every bullet hole!
There are two countervailing impulses motivating this picture, I think! Tar*ntino at once wants to make a picture that nobody’s seen before (at least, not since Mandingo, ha ha): a movie that doesn’t blink when confronting this evil chapter of American history! At the same time he wants to make a movie that everybody’s seen before, which is to say a movie assembled out of bits from the pictures he’s loved over the course of his long and busy history of moviegoing! Mostly in this case he’s cannibalizing from spaghetti Westerns as well as regular Westerns, and from other genres too, like buddy pictures and Blaxp*itation movies!
The strategy mostly works! The tone stumbles here and there, there are a few clunky and unnecessary lines, and Tarantino makes a poor choice in casting himself as an Australian, but the picture is for the most part a well-crafted entertainment machine whose 167 minutes fly by; at least until the final act, where some momentum is lost along with several principal characters! There are also several scenes in which someone is left to squirm in agony on the floor for several minutes, as though T*rantino was tipping his cap to The Demon Lover! Those parts didn't pass quite as quickly, ha ha!
Samuel L. Jackson appears as a scary L’Oncle Tom, and his performance is really quite good! He looks like no Samuel L. Jackson you’ve ever seen before, that much is certain! Christoph Waltz at first seemed simply to be very pleased with himself rather than bothering to give a performance, but this approach grew on me as the movie progressed, and in the end I thought he was pretty good! Everyone else, especially the lady who plays Django’s wife, was good too; though Di Caprio was a little cartoony! But he fit in pretty well anyway!
And of course there are many shout outs, little and big, to movies gone by! I even caught a reference to The Adventures of Buckaroo Banzai – and maybe another one simply in Tarantino’s hiring of that film’s production designer, the late and obviously very weird J. Michael Riva! And Franco Nero, famed from his roles in The Visitor and Die Hard 2, shows up as the other Django, and the opening credits trumpet his “friendly participation,” just as we see in so many Euro-pictures of the 60s and 70s! Ha ha, that made me smile!
It’s a flawed but entertaining picture, and I’d like to give Django Unchained three nodding horses!
Posted by Burl at 21:37