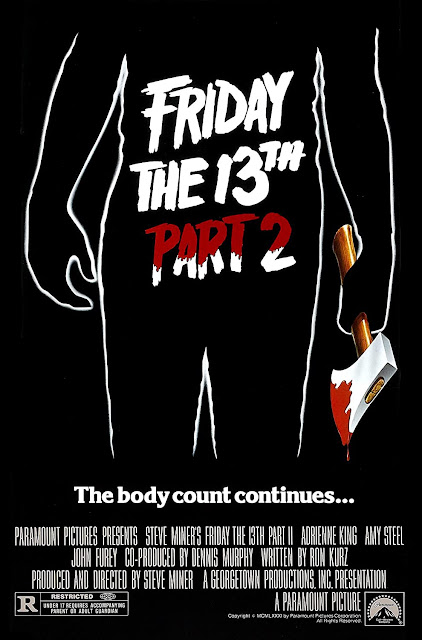 Chuff-chuff-chuff, pah-pah-pah, it’s Burl here again with yet another Friday the 13th movie review, part 2 this time! Ha ha, it just seems like the season for these things, though I have to admit, whenever I watch one, I do tend to think to myself “Ha ha, why on earth am I wasting precious time watching this silly movie?” I watch much worse pictures and don’t have thoughts like that, but there’s just something so calculated and disposable about these movies, which, when you add the fact that they’re pretty terrible, engenders these soul-crushing bafflements!

But I’m still drawn to the things for some reason, as are many others – you perhaps included – so we must accept our lot and make what we can of it! As I’ve mentioned in previous reviews, for parts 4 and 6 for instance, as with the Star Trek pictures, I tend to prefer the even numbered installments of this particular series! The first Friday the 13th has never done much for me, anyway! So what’s to prefer about part 2? Ha ha, it’s exactly the same story, except instead of Silly Steve Christie trying to reopen Camp Crystal Lake, it’s Upstanding Paul trying to open some sort of councilor training center at another abandoned camp right next door, and also on Crystal Lake!

It makes no sense, but it’s a clever way of skirting the issue that dogs these summer camp maniac movies, which is to say, how do you deal with all the kids running around? Anyway, of course the main difference between the two pictures, and the only difference required, many would say, is that it’s no longer Jason’s mother doing the poking, but Jason himself! He ties up a little unfinished personal business by jabbing the lady from the last one with an ice pick, and then it’s off to the councilor training center!

His first victim once he arrives is none other than Crazy Ralph, which I think is unfortunate! And I’m not the only one! I saw this movie on a midnight double feature with the first one sometime in the 1990s, and a fellow stood up after Ralph’s demise and said, and I quote precisely, “I love Crazy Ralph and will miss him like a brother!” Ha ha, there was respectful, empathetic applause from the whole rest of the audience, including myself! 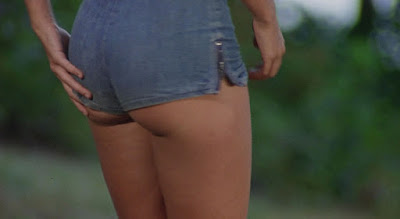 I like the hero lady in this one – maybe that’s why I like the picture more than I should! There’s nothing special about her really, but she’s pretty, and I think I probably had, and have, a bit of a crush on her! I also like that you get to see the inside of Jason’s house! He’s thrown together some corrugated metal and plywood, installed a few windows and a door, and furnished the inside with filthy rugs, several chairs and a little table, as though he expects one day to receive guests for tea! Ha ha! I l appreciate that little detail – it does more to humanize this mad killer than the psychological rationalizations for his murderous behaviour which are delivered by the drunken hero girl later on in a bar!

Of course most of the gore effects have to exist simply in your mind, since they were cut out by de facto censors before its original run! Consequently the picture is a little dry, but not entirely! There’s a pretty good machete-in-the-face gag, and some throat slittings and so forth! But the picture looks a lot better than the first one, which is a bit of a cheapie – this one has nice photography from a fellow named Peter Stein, who also of course shot C.H.U.D.!

Altogether it’s not terribly good, but it has a comfy-cozy attractiveness and a few funny details, and of course a very pretty lady! The ending is somewhat abstract, but I don’t mind that! When all is said and done, I give Friday the 13th part 2 two untubby jokesters!
Posted by Burl at 22:08