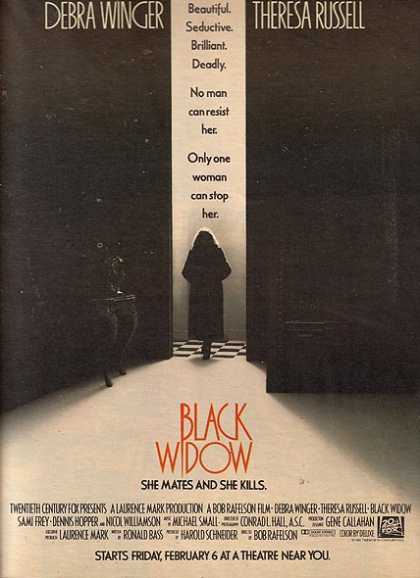 Hi, it’s certainly Burl here once again! Here’s a review of Black Widow, a 1980s movie that was Bob Rafelson’s grand return to filmmaking after a six-year absence! Ha ha, that’s not actually all that long an absence, especially when you consider that Rafelson had other six-year absences in his career, and in fact is working on about a ten-year one right now! It was also the great cinematographer Conrad Hall’s return after a decade doing who knows what (teaching would be my guess, or maybe he was lucratively shooting commercials!), and you can bet that Black Widow looks pretty good – no cobwebs on Hall’s eyes, ha ha!
But how’s the rest of it? I didn’t ever bother seeing the movie until now because of the lukewarm reviews it got at the time, particularly from the stalwart Mr. Roger Ebert! I’m not one who takes Ebert’s reviews as gospel – ha ha, certainly not since that review of Blue Velvet! – but he made a convincing case when it comes to Black Widow! And it turns out he was bang on!
The story has a Black Widow – figurative, not literal; this is no Curse of the Black Widow, ha ha – marrying a series of rich men, including such luminaries as Dennis “The Texas Chainsaw Massacre 2” Hopper and Nicol “The Seven-Per-Cent Solution” Williamson, and then poisoning them from afar by injecting toxins into their favourite boozes! Theresa “Track 29” Russell plays the Black Widow, and chasing after her is a federal investigator of some sort played by Debra Winger, an actress perhaps best known for her role in Slumber Party ’57! Ebert complained that her job was presented so vaguely that he thought at first she was a newspaper reporter, and I must admit to the same confusion!
Russell, who pitches small hissy fits whenever she becomes aware that someone is on to her little game, ends up in Hawaii in pursuit of millionaire hotel developer Sami “Bande à part” Frey! Winger is right there with her, and they become scuba diving buddies! I thought they might become a little more than buddies, in fact, as neither woman is presented as caring much for the amorous favours of men! It seemed quite natural that a romance might bloom between them, which would then dramatically complicate matters in an interesting way! But no, it pretty much remains a good-gal/bad-gal story all the way through to an unsurprising surprise ending!