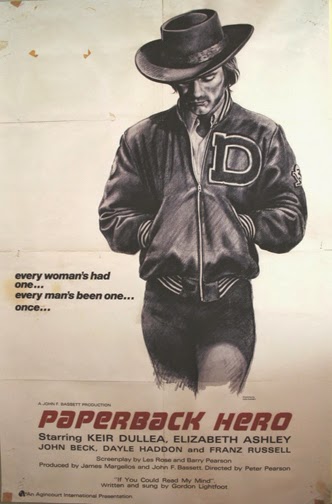 Ha ha, eh, it’s Burl, here to review a very Canadian motion picture! It’s called Paperback Hero, and while it might not quite be the most Canadian movie ever made (there are quite a few other contenders, including Rip-Off, ha ha), it’s got to be pretty darn close, eh!
The story, which prefigures the similar Last Night at the Alamo by a decade, tells of cowboy-hatted thirtysomething Rick “Marshall” Dylan, played by Keir “Black Christmas” Dullea! The Marshall is a world-class ruckuser, and sure as shootin’ the king pin of Delisle, Saskatchewan! He’s got a gunfighter complex, so he’s also the town’s greatest eccentric, and also, if you ask me, its biggest jerk! He treats ladies very poorly, is careless with firearms, is a monstrous egotist, and worst of all, perpetually wears a goony smirk! He’s completely unlikable, but you want to see what happens to him!
The movie really gets its hooks into you, even as you loathe this character and his ruckuses! Ha ha, it’s hard to figure out the ladies who love him, or even who can stand to be around him for more than a few seconds! Sure, he’s a good-looking guy I guess, but he’s dumber than a bag of doorknobs, and he’s violent too!
The town sort of tolerates him more than anything, though he’s got some admirers! His right-hand man and co-ruckuser is Pov, a bug ol’ lug with a wife and child, but barely more mature than his cowboy chum! Pov finally wises up towards the end, sort of! The admiration of the ladies is even more puzzling, because they seem reasonably intelligent! But the Marshall’s obtuse charms see to it that these ladies are seen without clothes a number of times!
As Rick begins to realize he’s a plain old loser, his ruckusing becomes more violent and destructive than ever! He develops a loathing of someone called Davis, and attempts to paint his car orange! His greatest nemesis next to the hated Davis is the local cop, played by George R. “Bells” Robertson! Threats of jail seem not to bother our Marshall, though! One of his ladyfriends informs him that he’s got “a brain full of dingleballs” and that really everyone is laughing at him! An enraged Rick burns a few donuts in his T-bird, then sets the stage for a climactic ruckus – a ruckus he may not swagger away from!
Ha ha, what a terrific little picture! It looks beautiful, thanks to sterling work from cameraman Don “Meatballs” Wilder, and is mighty well crafted by director Peter Pearson! Dullea is okay in the lead role, though sometimes he sounds like he’s from Texas (because the character fancies himself a Texan I guess!) and other times from Newfoundland! All the acting is about perfect for the movie, actually!
It reminded me a great deal of Explosion, only much, much better! But beware: it often gets billed as a hockey movie, except there’s not much actual hockey! There’s a pretty epic brawl though, and some erotic moments involving a Habs jersey! There’s lots of wheat stalks waving in and out of frame and shots of fields seen through barbed wire! “There’s too much goddamn sky, and not enough beer,” laments one character about Delisle, and maybe the movie is ultimately about what living that way can do to you! Ha ha, I’m going to give Paperback Hero three and a half boards about yea big!
Posted by Burl at 01:09