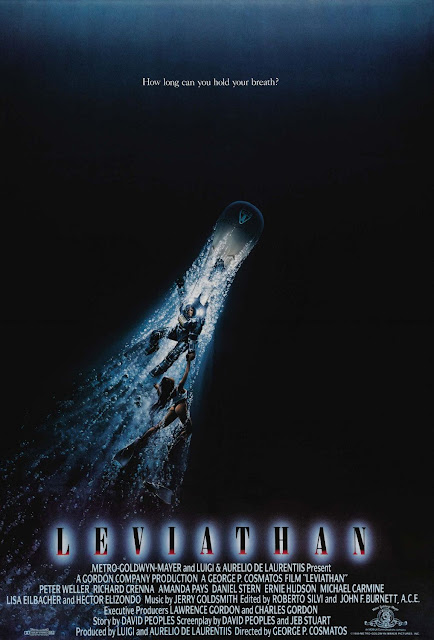 Speaking bubbly, it’s Burl, ducking my head beneath the waves to bring you a review of yet another of the underwater monster movies of 1989! You’ll remember it well, I’m sure: in January we got Deep Star Six, in August we plunged down The Abyss, and somewhere in between, in around March of that year I believe, came this picture, Leviathan!

As has likely been noted by every single other reviewer, if you took Alien and The Thing, mashed them together, plunged them to the bottom of the sea, and made them not very good, you’d get Leviathan! Ha ha, it’s amazing how precisely the picture tries to ape those two predecessors! It’s shameless, really; and then you add on the fact that it was only one of several underwater creature pictures that year, and it starts to seem pretty darn derivative!

Our characters are undersea miners nearly at the end of their ninety-day tour of duty! The boss man is Beck, played by Peter Weller from Buckaroo Banzai and Robocop, and his character note – his single character note – is that he’s not an administrator by trade or avocation, but a geologist, and struggles with the people-managing parts of his job! Richard Crenna from First Blood plays the Wilford Brimley part of the doctor who, on realizing that the problem won’t be cured simply by the application of a little Bon-Zoe, comes to believe the goings-on at the undersea mine must be kept at all costs from infecting the rest of the world!

But wait, just what are the goings-on? Well, the resident jackanapes, an unpleasant, bathrobe-wearing workplace harasser and all-around reprobate called Sixpack, mysteriously tolerated by the rest of the crew and played by Daniel Stern from C.H.U.D., discovers a sunken Russian vessel called Leviathan, and filches some vodka from it! He and a lady called Bo, essayed by Lisa Eilbacher from 10 to Midnight and Beverly Hills Cop, sip from the vodka flask and soon start growing scales and other assorted bodily unpleasantnesses! The rest of the crew, which includes Amanda Pays from The Kindred (in which, you’ll recall, she turns into a fish mutant, ha ha!), Ernie Hudson from Ghostbusters, Hector Elizondo from Pocket Money and The Fat Black Pussycat, and Michael Carmine from Invasion U.S.A., realize, to their horror, that their former colleagues are blobbing together and becoming weird bloodthirsty monsters!

Meg Foster from They Live plays the evil company woman with whom Beck occasionally teleconferences; she’s always hanging up on him and is of no help anyway, so the miners arm themselves with an assortment of makeshift weapons, including a flamethrower, I suppose because Alien and The Thing had them too, a highly impractical-looking saw, a fire axe, and also a hedge trimmer for some reason! The biology of the monsters is pretty confusing: there’s the blobbing together, but also presumably some kind of cell-like division, which, if that happens, is kept off screen! Tentacles that are chopped off swim around and grow into new monsters, or expel toothy eel things that look like the monster from Parasite! In short, you never know how many monsters there are, what they might look like, or what needs to be done for the monster peril to be defeated!

All the monster scenes are terribly staged and incomprehensibly edited, and one gets the sense that thanks to this incompetence, a lot of the creature effects crew’s hard work was elided, obscured, and otherwise ignored! Behind the megaphone is George P. Cosmatos, who brought us Rambo and Cobra (or at least so the credits claim) and directed Weller in a rat picture called Of Unknown Origin, and he brings one or two moments of style to the movie but otherwise works in a very static, pep-free mode! The underwater stuff is done in the same dry-studio way they did that old Irwin Allen show about the bottom of the sea, but, with some fine camerawork and by sending the occasional big-jawed fish across the screen on a string, the effect is not too bad!

The cast, as you can see, is pretty great, and they certainly spent some money on the sets and trick effects! They might have spent more time on the body horror aspect before getting to the monsters, and would that they’d given the characters more than one single characteristic each (Sixpack is an unpleasant horndog; Pays loves money; Hudson hates waves; Eilbacher has nice breasts; Carmine, in the role of DeJesus, is obsessed with Alpine skiing; Elizondo, the shop steward, is a by-the-book union man; and Crenna’s doctor is never around when you need him), but I remember having fun with this in the theatre, as I had fun with all the underwater movies that year, so I’m going to give Leviathan one and a half tube worms!