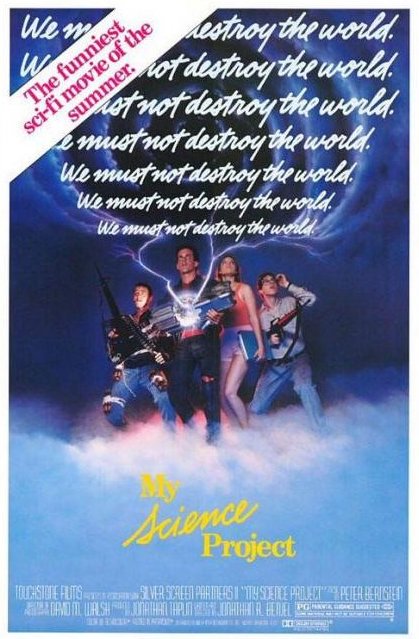 By all the brain wizards, it’s Burl, here to review another of the many science lad pictures that came out in the years 1985 through 1986! If you cast your net wide, you can see just how many of them there were: you’ve got Back to the Future, Explorers, Weird Science, Real Genius, The Manhattan Project, Deadly Friend, The Wizard of Science, proto-examples like WarGames, fringe constituents like Flight of the Navigator and D.A.R.Y.L., and then of course today’s entry, My Science Project!

The picture opens with a nice flashback sequence set in the 1950s, showing a plus-fours-sporting Dwight Eisenhower - played by an actor called Robert Beer, who also played Eisenhower in The Right Stuff, and in fact only ever played Eisenhower in every movie he ever appeared in - being shown a UFO, and ordering it dismantled and buried! Thirty years later, grease-stained high school gearhead John Stockwell, who played a grease-stained high school gearhead in Christine, must come up with a project to satisfy his mad hippie science teacher played appealingly by Dennis Hopper from Black Widow! Crawling around in a junkyard, Stockwell comes across a piece of the UFO, and from there it’s the dimwitted greaseball, his bookish tagalong semi-sweetie, an unsavory, finger-gloved best friend played by Fisher Stevens from The Burning, and an intolerable glasses nerd called Sherman, all trying to prevent the device, or gizmo, or whatnot, from opening up a time portal and causing life on earth to become an interdimensional four-vector crossways of simultaneous overlapping gravitomagnetic streams of spacetime! Ha ha!

In theory this sounds interesting, but in practice we get lots of blue-light optical effects, sparking batteries, and a high school invaded by cavemen, conquistadors, Viet Cong soldiers, and a dinosaur, and not much pondering on the larger implications! The trick effects, in particular the dinosaur, are well done, and the desert-town setting is visually appealing and occasionally atmospheric! But the picture is narratively chonky and tonally muddled in a way that usually indicates either bad direction or studio mutilation, or both! Given that the director was a first-timer, and his only feature credit after this was the Whoopi-dinosaur buddy-cop amscray Theodore Rex (which indicates at least that he knew the best part of his debut was the T-Rex), one is tempted to blame him; but Touchstone Pictures was, I believe, known to “touch” their pictures quite a lot before releasing them! Ha ha!

So it’s not a great picture, but it’s occasionally fun, particularly when Dennis Hopper is on screen! There’s a supporting cast of familiar faces too, like Barry Corbin from This House Possessed, playing Stockwell’s dad; Ann Wedgeworth from No Small Affair playing his new stepmom; Richard Masur from The Thing as a tough-guy detective; small roles for Robert DoQui from Cloak & Dagger and Jackson Bostwick from The Prey; and of course Michael Berryman from Deadly Blessing, again playing a mutant! For these worthies, and for some nice trick effects, and for a premise that might have been squandered, but at least had promise, and for the featured appearance of a cherry GTO, I give My Science Project a grade of one and a half laughing stewbums!