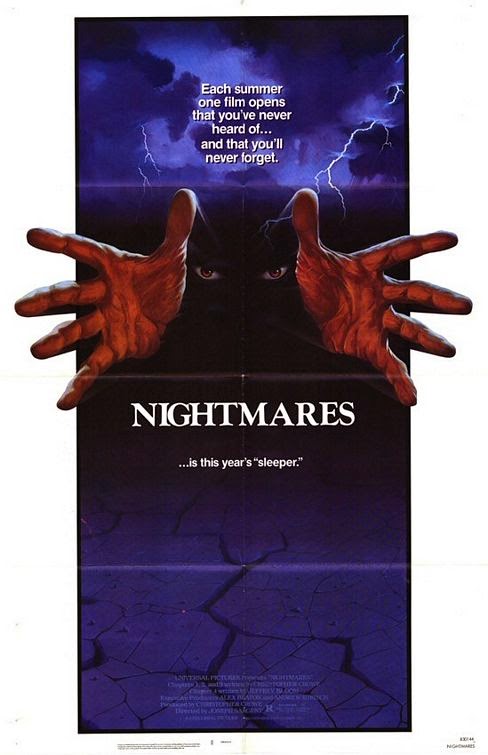 Ha ha, Burl here, to review “this year’s sleeper!” That was the little phrase used to sell the omnibus horror movie Nightmares back in 1983, and I know because I had the poster for it hanging in my room for a while, with those eerie eyes and grabby hands! I recall seeing the movie in the theatre too, and thinking “Ha ha! I guess that was all right!”
I had less refined tastes back then, you see! I watched the movie again recently, and let me tell you this: it looks exactly like what it is! And what is it? Ha ha, it’s a made-for-TV movie that was judged by someone to be too good for the small screen, and was released into theatres on the assumption it would be a hit no one could have predicted! I don’t think it was much of a hit, and I don’t think it would have seemed out of place on 1980s TV either, ha ha! As horror anthologies go, it’s certainly many rungs below Dead of Night!
It was made by Joseph Sargent, the fellow who directed, on the one hand, the great Taking of Pelham 1,2,3, and on the other, Jaws: The Revenge! So you just never know what the guy’s going to come up with, ha ha! What he’s come up with here is four stories of largely suburban character, most of them pretty preposterous! The first one, “Terror in Topanga,” is the exception: a lady (Cristina Raines from The Sentinel and Hex) living in the canyon of the title is compelled to leave the house for cigarettes when she knows perfectly well a maniac killer is stalking the neighborhood! The killer is played by Lee Ving, whom we know from Grave Secrets and Get Crazy, and the redherringsman who plugs him is an uncredited William “Blade Runner” Sanderson!
The second story is the one people remember best: “The Bishop of Battle!” Ha ha, let’s begin! Emilio Estevez, fresh from Repo Man, plays J.J., a youth maniacally addicted to video games, and in particular The Bishop of Battle, a sort of mash-up of Berzerker, Battleground and Asteroids! J.J. listens to the movie’s curiously legit So-Cal punk soundtrack (X, Black Flag, Lee Ving’s group Fear) as he gonzes out to his precious video games! After a video flip-out, on his parents and his little buddy Zonk (played by Billy “Hospital Massacre” Jacoby), J. J. faces the Bishop himself in all his vector-graphic majesty! The Bishop’s placid voice, provided by James Tolkan from Wolfen and Armed and Dangerous, gives him a slightly otherworldly eeriness!
Next comes Lance Henrikson, whom we know best from The Visitor, playing a desert-flower priest who’s lost his faith, and it takes a devilish pick-up truck to settle his hash, ha ha! Robin Gammell, from Skyline and Bells, plays, ha ha, The Cardinal! (I guess “The Bishop” was taken!) And the last story is “Night of the Rat,” in which Veronica Cartwright, whom we recall from The Witches of Eastwick, and her nasty umglaut of a husband, Richard “The Thing” Masur, are plagued by a big giant rat which spooks them and throws cornflakes!
Well, there’s the odd effective moment here and there, and a soupçon of pep, but no more than you might find in any garden-variety TV terror picture! The video game trick effects are pretty good I suppose, but the big giant rat looks like they got Bert I. Gordon to do it! Altogether unmemorable, but worth revisiting if you have fond memories of the Bishop! Ha ha, I’m going to give Nightmares one and a half cabinet-game fritz-outs!
Posted by Burl at 17:59

Email ThisBlogThis!Share to TwitterShare to FacebookShare to Pinterest
Labels: 1980s, horror, omnibus, saw it on the big screen, supernatural