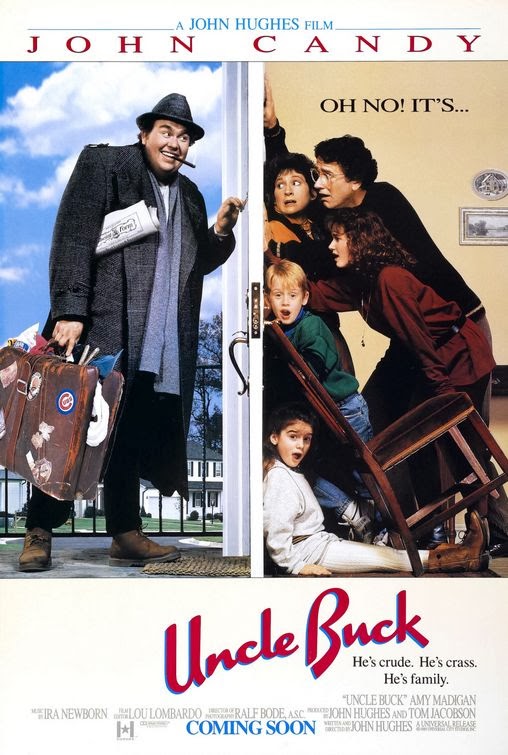 Hi, bananas! It’s Burl! Ha ha, I’m here to review a John Hughes picture I’d never seen before! I thought, ha ha, since I’ve enjoyed many of his other works, like Weird Science and so on, so forth, I should give this one a look too! Plus it has John “Armed & Dangerous” Candy as the titular avunculus, so hey, why not!
The important thing in setting up a high concept late-80s comedy like this is establishing the situation, however unlikely it might be! We have a family, and a well-to-do one it is from the look of their giant house! Presumably they live in Shermer, the same Chicago suburb wherein dwell Ferris Bueller, the Breakfast Club gang, the lady from Sixteen Candles and so forth!
But, ha ha, they have a problem! More of an inconvenience, really! The spectacularly unphotogenic mother’s father is ill, and they must go to whatever Midwestern backwater he lives in to offer succor, and for some reason both parents must make this trip, and for some other reason the teenage daughter can’t be relied on to provide care for the two younger children (quite reasonable, actually); and for some other reason entirely, adequate care cannot be found! Enter Uncle Buck, who’s meant to be a family black sheep but in reality is a dogmatic moralist who might give the sternest Puritan a run for his money!
The teenage daughter is a grim specimen indeed: she’s perpetually angry for no particular reason, much like the sister in Ferris Bueller’s Day Off, and she’s rude to poor Uncle Buck and mean to her little brother, who’s played by the kid from those Home Alone pictures! Macauley Conklin is his name!
Meanwhile Uncle Buck has his own problems, which revolve around his ladyfriend, Amy “Streets of Fire” Madigan! Ha ha, when will this oversized manchild finally grow up? It’s the dynamic we see in so many 1980s comedy pictures! But here, as wonderful as John Candy is – and he has many great moments – he never really convinces as a dyspeptic layabout! Ha ha, he’s just too upright of a fellow!
There’s not much of a plot here, and few jokes that are funny, and not much that sticks in the memory! For the first half of the thing, such was its polytetrafluoroethylene character that I wasn’t sure whether or not I'd even seen it before! It turns out I had not! And now that I have, I think there remains only one or two Hughes-directed pictures I haven’t watched, and at least one of them concerns a little girl and a grumpy TV star! Ha ha, I won’t be rushing out to find that one, I don’t think!
The picture has a few endearing cameos, principally that of Mike Starr, well known from The Money Pit and Funny Farm, in the role of Pooter the Clown! But beyond that, a good heart, and a few funny bits, there’s not much to recommend it! I watched it more out of a sense of obligation, as well as the Everestian “because it was there!” (Ha ha, I got it as part of a bulk VHS pawn shop score!) So on balance, and after much serious consideration, I’m going to give Uncle Buck one and a half giant pancakes!
Posted by Burl at 16:37