Burl reviews The Nightmare Before Christmas! (1993) 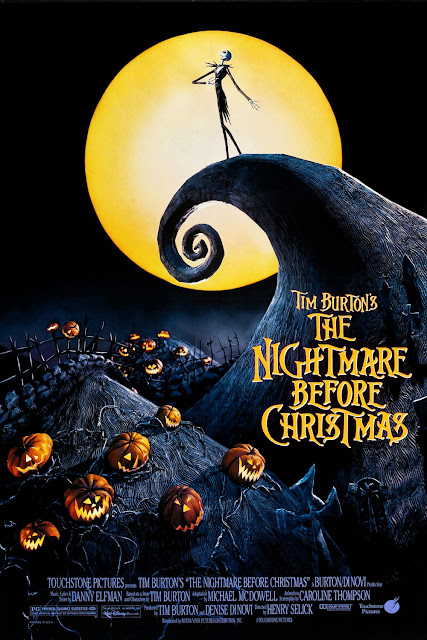 Ha ha, ho ho ho and booga booga too, it’s Burl! Yes, I’ve just come from a special screening of the animated picture The Nightmare Before Christmas, with a full orchestra playing the Danny Elfman score, so perhaps this review will be slightly skewed by this charming and unusual movie-going experience! Or perhaps not; it’s hard to say! All I know is that it was y first time seeing this picture in any scenario, so my impression will always be that its standout quality was the music!
And this of course is hardly fair to the animation, which is stellar! The story I found less compelling, but that’s okay! It all takes place in the magical world of holidays: each special calendar day, it turns out, has its own little world, which is responsible for that particular holiday! Ha ha, I guess it’s a stretch to call Halloween a “holiday,” because, after all, it’s not exactly holy, and more crucially, your boss doesn’t give you the day off of work!
But anyway, in Halloweentown, a lanky fellow called Jack Skellington is the Pumpkin King, the fellow evidently most responsible for coming up with their annual scary Halloween gambits! Everyone loves Jack, ha ha, but he himself falls prey to a vague but powerful misgiving, a feeling that there must be more to life than Halloween! And so there is: he comes across a forest glen where trees are marked, restroom-style, with the symbols of different holidays, and the trees prove to be doors! After a brief sojourn in Christmastown, Jack is charmed by the concept and resolves to bring Yuletide joy to Halloweentown!
Jack’s specific plan is a little half-baked, but he ends up masterminding the kidnapping of Santa Claus, whom he imagines to be a towering half-man, half-lobster with snapping claws and crushing mandibles! This turns out to be a misapprehension, ha ha!
Anyway, by the time Christmas comes and Jack is riding a coffin-sled pulled by skeleton reindeer, he’s given cause to regret his rash embrace of someone else’s holiday, and Santa certainly upbraids him for the attempt! Ha ha, perhaps Jack would have been better off appropriating Casimir Pulaski Day! Christmas is saved in the end, and the main bad guy, some sort of boogen living in the basement, is revealed as being made of bugs!
There are Tim Burton design touches everywhere to be found, which would surely have felt fresher back in 1993! Ha ha, Christmastown is sort of boring and boilerplate; you can tell his heart is in Halloween! The movie itself was directed by Henry Selick, who later did a fine job with Coraline and other creepy animations! Jack is given voice in song by Elfman himself, which occasionally gives the thing the flavor of a feature-length Oingo Boingo video; his speaking voice, less frequently heard, comes from Chris Sarandon, well-known from Fright Night! Catherine O’Hara from The Paper provides the female voices, and William Hickey from The Sentinel is a nasty duck-lipped scientist!
I enjoyed watching the picture, but having missed out on it all these years, I can’t see it becoming a holiday perennial for me! Maybe there were just too many songs! But there’s lots to admire, and the live orchestral accompaniment was a lot of fun, so I’m giving The Nightmare Before Christmas two and a half shrunken heads!
Posted by Burl at 09:32