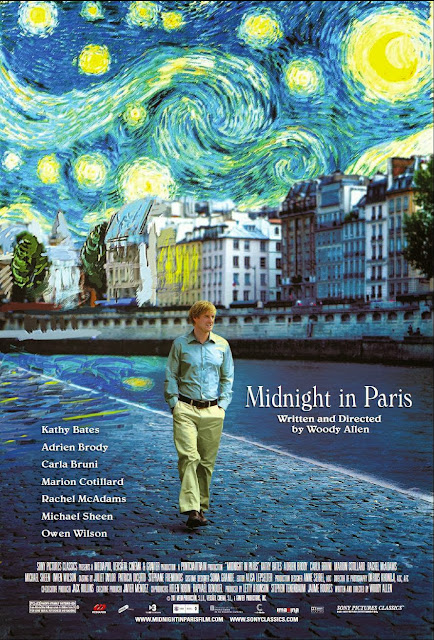 Hi, ha ha, it’s Burl to review one of the newer Woody pictures! I’m talking about Midnight in Paris, and that’s a film I was pretty interested in seeing – so much so that, as part of my self-imposed summer reading program, to prepare for seeing the picture, I read not only A Moveable Feast by Ernest Hemingway but The Best Times by John Dos Passos! And of course I’d already read Luis Bunuel’s My Last Sigh (one of the greatest film director autobiographies ever, in ol’ Burl’s opinion!) and other relevant texts as well!
These were excellent preparations as it turned out! I had a great sense of the lay of the land in 1920s Paris, where much of the picture takes place, and an idea of what Hemingway, Bunuel, Gertrude Stein, the Fitzgeralds and other such personages might have been up to when Owen Wilson’s wide-eyed geek wasn’t communing with them before Woody Allen’s camera! On the other hand, though, my interest in the period meant that I sort of wished Owen Wilson would just go back where he came from and we could stay in this magical gilded time to hang out for a bit, maybe by watching The Moderns instead!
Well, that’s as may be! The plot is that Owen Wilson is visiting Paris with his horrible fiancée and her horrible parents, and they chance to run into a pair of her horrible friends as well, and all of this is just so horrible that Owen Wilson, playing a successful Hollywood screenwriter with novelistic aspirations, conjures up an old Peugeot which spirits him back to olden days! And of course, as is the case whenever anyone goes back in time, he immediately meets the most famous and accomplished people of the period!
But has he really gone back in time, or is this just some elaborate psychological bid to flee an intolerable present and embrace a period he knows little about but romanticizes out of all proportion? Ha ha, the great thing is that, as Bill Murray tells us in Meatballs, It Just Doesn’t Matter!
It’s a little unfortunate that Owen Wilson’s character is such a successful screenwriter! I know he’s meant to demonstrate that it doesn’t matter how comfortably successful you are if you don’t feel you’re doing the right thing with your life, but I think he would have been a more interesting guy if he’d been, say, a short-order cook who was in Paris for the first time only by grace of the in-laws-to-be that he hates!
There are other flaws with this motion picture: some over-facile jokes and references; a too-stammery-by-half Wilson; a general feeling of inconsequentiality; but on the whole it’s a really enjoyable will-o-the-wisp of a picture! There’s some fantastic music, a few fine cameo performances from the likes of Kathy Bates, perfectly cast as Gertrude Stein, and Adrien Brody as the sort of Dali who used to teach painting on SCTV; and of course there are many lovely views of Paris, which Allen treats in the opening moments with almost as much reverence as he gives Manhattan in the movie of the same name!
Also, that French lady who sells the Cole Porter 78s may be a stock character mouthing unlikely badinage, but she’s really gorgeous! Allen, you know how to pick ‘em! I give this frolicsome trifle a solid two and a half missing detectives!
Posted by Burl at 12:03