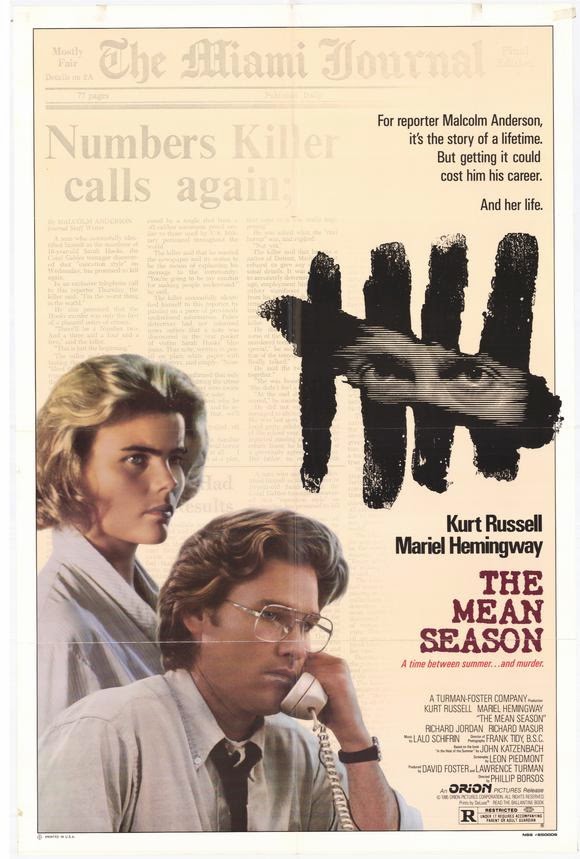 Why, stop the presses, it’s Burl! Ha ha, yes, I’m here with another review for you, this time of a mostly forgotten mid-80s newspaper thriller called The Mean Season! It was the first step into the Hollywood machine for its director, Phillip Borsos, who’d earlier made that fine Richard “Into the Night” Farnsworth bandit movie The Grey Fox! Like William Girdler, the young fellow who made The Manitou, Borsos was struck down at an all-too-early age, leaving his career largely a matter of speculation!
We can certainly consider The Mean Season as a pretty fair consideration of his authorial stamp, if he had one! Ha ha, I always think it’s a good test of a director’s skills to do a completely generic middlebrow thriller script like this, just to see what they do with it! Mostly they end up making completely generic middlebrow thrillers, ha ha, but not always!
Here we have Kurt Russell, well known from his role in Big Trouble in Little China, playing a newspaper reporter fairly characterized by his editor (played by Russell’s compatriot in The Thing, Richard Masur) as not having done the job long enough to be as burnt out as he thinks he is! At any rate, he and his ladyfriend, Mariel Hemingway, are about to pull up stakes and move to Colorado when, what do you know, a crazyman begins a program of murder and pulls Russell into his scheme by enlisting him as his “conduit to the public!” This means plenty of waiting around for the phone to ring and a great many laden phone conversations once it does! Meanwhile, shutterbug Joe Pantoliano snaps photos of everything he sees!
The cops, represented by Richard Bradford and a young Andy Garcia, seem engaged but at the same time curiously aloof! Eventually, after some help from none other than William Smith of Action U.S.A. fame, the killer is identified as Richard “The Hunt For Red October” Jordan, delivering a fine performance as the cunning but pathetic psychopath! There’s a kidnapping and a chase and a small twist later borrowed by The Silence of the Lambs!
On the whole it’s a story we’ve seen before! Helping it stand out a little bit are the many shots of heavy skies and swaying palms which presage the climactic hurricane; the accurate-feeling newsroom atmosphere (it seems closer to reality than The Paper, anyway!) and a pretty solid cast! There’s also a barely-seen Special Makeup Effect near the end, courtesy of cosmetician Craig “Dreamscape” Reardon! Ha ha, gruesome!
But it mostly stays doggedly within the framework of the Generic 80s Thriller! It never really takes advantage of the opportunities for suspense, and though it wrestles manfully with the ethical problems faced by Russell’s character, and isn’t afraid to show him being a jerk, there’s not much more to him than that, along with his much remarked-upon newspaper writing acumen, of course! It’s an okay picture and you could do a lot worse – ha ha, I certainly liked it better than other 80s pflugulens like Someone To Watch Over Me or Black Widow, for example – but on balance I think I’ll have to award The Mean Season two marvelous green Mustangs!
Posted by Burl at 10:51