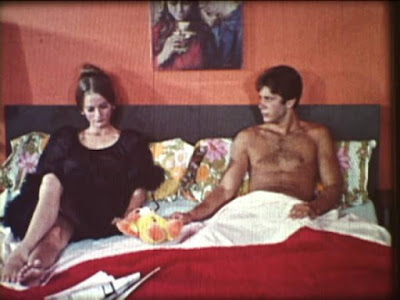 Ha ha, it’s Burl here with an erotic mystery! Before we get to the review portion of this entry, I should tell you the circumstances which brought me to watch today’s movie, The Young Marrieds! It’s a little odd!
I found a videotape in my basement the other day, in a plain black box with no label, just the word PRON written on it in gold ink! Ha ha, I thought, what’s this! I have plenty of old VHS tapes, but I couldn’t remember ever seeing this one before! Well, out of curiosity, I put it on, and guess what! It was a picture called The Young Marrieds, directed by someone called Richard Trent, and, after a strange opening scene featuring bizarre narration describing the birth of mankind from the primordial ooze, the movie quickly revealed itself as a genuine pornoo! It was clearly a product of the early 1970s and the tape looked looked as though it had been Poor Man’s Transferred off the side of a smoke-stained rec room wall! I watched for a while, through scenes of a jerkish man suffering from severe homophobia who first watches a stripper, then, departing the club in his dune buggy, picks up a hitchhiker and is given whistle-dog by her in a remote forest location! Then I turned off the movie and went to my computer, curious to find out what exactly I was watching!
Well, ha ha, would you believe it! The Young Marrieds turns out to be the last feature film directed not by “Richard Trent,” but by none other than Ed Wood! I could hardly believe it! Not only that, but it had apparently been considered a lost film before a print was rescued from a falling-down Vancouver cinema in 2007! That’s odd, I thought to myself - I didn’t think I’d looked in that box of basement videotapes since sometime in the late 1990s! So could I have had my own tape of The Young Marrieds this whole time, before even the 2007 discovery? If so, where did it come from? Who had written PRON on there in golden ink? Very weird! Oh well, I thought, might as well watch the rest of it! 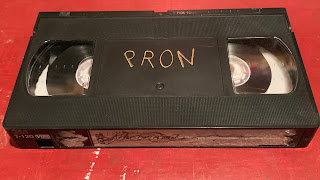 It’s the tale of a young husband, Ben, a total cras-cren-bon, who’s all bent out of shape because his wife Ginny (played by Alice Friedland from Cindy and Donna) doesn’t care to please him in the bedroom! So he receives whistle-dog from strangers and spends half his time in the strip club, and even when he’s at work he can’t keep his mind on things! One day Ben brings home a camera and starts shooting provocative pictures of his wife, and she starts to loosen up! Ha ha, she even performs whistle-dog on him!
Then he takes her to his co-worker’s house where a desultory orgy is in progress, and the wife returns to her chilly ways! But the bare-chested he-man she is paired with soon has her on the floor with his dominance, at least according to the flatly intonated narration! We then get more out-of-focus whistle-dog and various other oro-genital amusements, all set to a steady soundtrack wash of moans, groans, wet smacking sounds, and lounge music!
Then suddenly the orgy takes a turn to “another strata of sex play” which threatens to take Ben “through the gay veil!” The scene ends inconclusively, with Ben, evidently assailed by imbecilic doubt, imagining still images of himself kissing another man! Then we get some more shots of the ocean, and the narrator drones “Let us be patient, tender-wise, forgiving in this strange task of living, for if we fail each other, each will be grey driftwood relaxing in the sea!” Ha ha!
Well, it’s an odd denouement, but entirely keeping with the oddness of the thing entire! And it’s not just the windy pronouncements of the narrator: this picture has sexual politics so bizarre as to be alien, even for 1972! The virulent homophobia of the main couple is pretty off-putting, and the long scenes of whistle-dog are just boring! Ha ha, I zoomed them, I must admit!

Sexcula notwithstanding, I’m not really a great one for pornoo - watching other people make sweet love is like watching other people play Pac-Man: you’d really rather be doing it yourself! But as pornoo goes, I suppose The Young Marrieds is compelling enough just for being so weird, and that it was old Eddie’s last picture makes it of historical interest! I have no idea where I got this tape, but I’m going to give The Young Marrieds one little falling-down framed picture! Ha ha, can you prove it didn’t happen?
Posted by Burl at 14:01