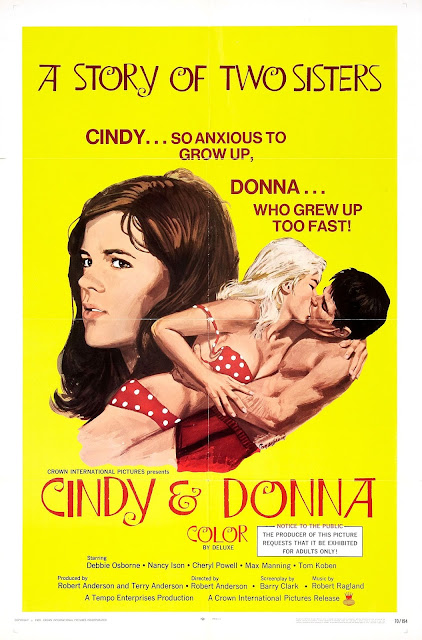 Ohhh it’s Burrrrlllll, sweeeeet Burrrrllllll, where are you tooooo-niiiight??? Ha ha, that was an attempt to give myself a syrupy theme song, the sort of warbling tune we find in movies as diverse as Sweet Sixteen and Cindy and Donna! And of course it’s Cindy and Donna I’d like to ramble on about today - a Crown International special from the days before they turned fully to the teen sex comedy genre with pictures like The Pom Pom Girls, Van Nuys Blvd., Malibu Beach and The Van, and instead put all their energy into weird nudie dramas!

Cindy and Donna Weeks are sisters, and in fact the movie is really a portrayal of the entire Weeks family, which is spectacularly dysfunctional! At sixteen or whatever age she’s supposed to be (the actress is of course in her twenties), Cindy has already developed a sort of prudish housewife mien, while her sister Donna is a wild child with poor judgment skills! Their mother speaks in a bizarre accent that seems half New Jersey and half just plain Jersey; she’s a nagging, bitter lush who’s of no help to her daughters! Dad is a barfly with a bad case of wandering eye and a hankering for Donna which turns out to be reciprocal! Ha ha, yuck-o-bah!

The father also hankers after the world’s laziest erotic dancer, ha ha, who is played by Alice Friedland from The Young Marrieds and is the same age as Donna! Again, yuck-o-bah! Meanwhile the mother tries to pick up Dad’s barfly friends, but they just put her in the car and send her on her way! Cindy gets more and more prim as her family becomes more and more debauched, but finally she’s had too much, and something within her busts! First she enjoys (or doesn’t enjoy: it’s hard to tell) a touch of bohankie with her more worldly gal pal, and then near the end of the picture she makes a bold play for Donna’s boyfriend! Donna arrives home in the middle of it, raises an objection, and is commanded to leave her own house by the nasty jerk of a boyfriend! Donna flees, trips over a little red wagon, and is creamed by a passing vehicle! As Cindy scream-weeps for her sister, the syrupy title song begins again and the credits roll!

It’s a strange picture, ha ha! Of course there are plenty of ladies in dishabille, but I can’t tell if it’s the work of someone who earnestly wanted to tell the story of a crazy malfunctioning family and the tribulations of being the youngest daughter of such a clan, and then they added all the sex to make it marketable; or if they wanted from the get-go to make a sex picture and then came up with this weird quasi-drama in an attempt to make it dramatically respectable! I suppose it was probably the latter, but I like to think it was the former, and that it was a story director Robert Anderson - whose first movie this was at age fifty-three, and who later went on to make The Young Graduates - simply had to tell!

Not only is it a strange picture, it’s a bad one too, I’m sorry to say! No great filmmaking skills nor cinematic imagination are in evidence, and the simulated bohankie on display is pretty cheerless! It’s got a some value as an artifact or a curio, I suppose, but not a lot beyond that! I give Cindy and Donna one spark plug box mobile!