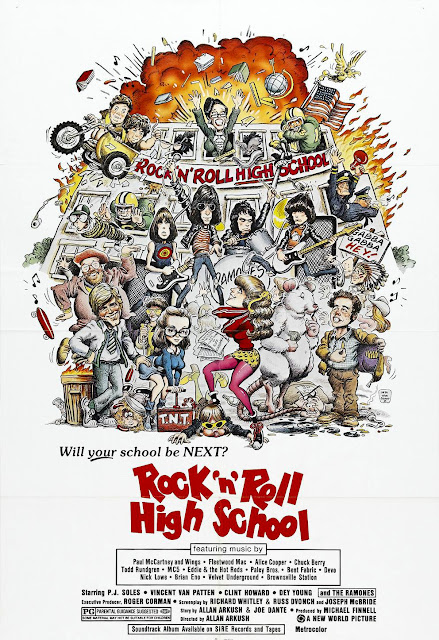 Hey ho, let’s go, it’s Burl Ramone here with another movie review for you! Yes, it’s that paean to rock n’ roll and to some of their high priests, those leather-jacket lotharios the Ramones! Of course the movie is Rock 'n’ Roll High School, and it’s always been funny to me that, after being conceived originally as something called “Disco High,” before it was pointed out that a school could not be blown up to disco music, and then cycling through rock bands as diverse as Devo and Van Halen, the picture ended up with the Ramones as their superstar all-time teen idol crush objects! Ha ha, I’m a tremendous Ramones fan, but the idea of them as objects of starry-eyed devotion is amusing indeed!

P.J. Soles from Halloween plays the marvelously-named Riff Randall, the top Ramones fan at Vince Lombardi High! Concurrent with the building excitement for the big Ramones show the entire school wants to attend is the appointment of a new principal at Vince Lombardi, a tight-bunned autocrat called Miss Togar, played by that singular talent Mary Woronov from Cannonball! With her two Katzenjammerish hall monitors, she institutes a reign of terror; meanwhile, Riff waits in line for three whole days and buys Ramones tickets for the entire student body! Meanwhile again, there’s a romance triangle: a gormless sweater-jock played by Vincent Van Patten from Hell Night sets his cap at Riff (who only has eyes for Joey Ramone of course), while Riff’s friend, a sweet nerd played by Dey Young from The Running Man and The Serpent and the Rainbow, sets hers, for some reason, at Van Patten! It falls to boy’s room entrepreneur Eaglebauer, played by Clint Howard from Ticks and Apollo 13 as a good-natured cross between Milo Minderbinder and Sgt. Bilko, to try and put things aright!

Paul Bartel from Piranha is Mr. McGree, a rather stuffy music teacher who is yet open-minded enough to give the New York good-time rock combo a chance, and once he attends their concert, he’s shouting Gabba Gabba Hey along with everyone else! Ha ha, he doesn’t even mind when Joey calls him “Mr. McGloob!” He’s a very likeable fellow, I must say! The Ramones concert sequence is highly reminiscent of the concert stuff in Get Crazy, which makes sense since they were both directed by goodtime music lover and ex-Fillmore East usher Allan Arkush! (Ha ha, a trivia for you: by the end of the shoot, Arkush became too sleepy to continue, so Joe Dante had to direct the last day or so!)

When Miss Togar pushes Riff Randall and the rest of the student body too far, they take control of Vince Lombardi High and rename it Rock 'n’ Roll High School! The fantastic and much-beloved Dick Miller, known from from Armed Response and Explorers and many dozens more, is called in to help keep the peace, and truth be told his character doesn’t do much except stand around and call the Ramones ugly! But it’s great to have Miller there, so ha ha, I’m not complaining! It all ends with a tremendous explosion which, like much of the rest of the picture, belies the measly $300,000 they spent on it!

The movie is chock full o’ delights: a great cast, the hilariously bad acting from the Ramones, a marvelously sincere embrace of the anti-authoritarian spirit of rock n’ roll, and a boogie van called the Warlock! Dey Young is pretty, but her crush on the dweeby square played by Van Patten is mystifying! Ha ha, oh well - different strokes, I guess, and anyway by the end, like many a teen Romeo before him, Van Patten is singing “Sweet Mr. Sansregret” at the top of his lungs! It’s altogether a fun time at the pictures, and I give Rock 'n’ Roll High School three placards reading “Gabby Hayes!” Ha ha!