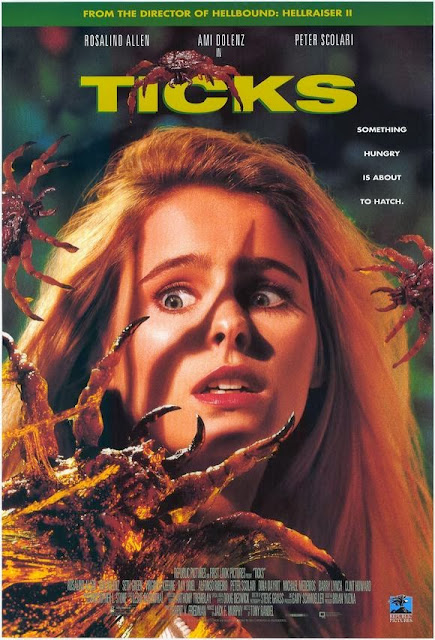 Buggy-wuggy, it’s Burl! Ha ha, yes, I’m here to review a bug movie, and a pretty slimy one it is too! The picture is called Ticks, and although it comes from the director of Amityville 1992: It’s About Time, it contains no appearance from the great Dick Miller!
But it most certainly contains ticks! The story is pretty unimaginative: a group of city youth are transported for vaguely therapeutic purposes to a broken-down Jason-style summer camp in the wilderness! Meanwhile, Clint “The Paper” Howard is using special steroids to grow pot, and these produce gloopy things that break open to release giant wood ticks! There are almost as many of these gloopy things in the picture as there are ticks, ha ha!
Meanwhile extra trouble is caused by a separate group of “cash croppers,” a drooling, moss-toothed über-redneck and his plummy, ascot-wearing partner! The latter looks like a low-rent Gary Busey, but turned out to be Richard “The Premonition” Lynch’s brother! There’s lots of highly ignorable character interplay, and then many scenes of slime and gloop and tickbites!
Ha ha, the head of the camp or socio-therapy program or whatever it is, is played by the fellow from Newhart! No, not Bob Newhart, not Larry or Darryl or Darryl, but the other one, the bosom buddy! And the main kid is the junior Woody from Radio Days, Seth Green! Otherwise the cast is mainly unknowns or relatives of more famous people!
At this point in the great and ever-evolving history of low-budget sci-fi/horror pictures, things were pretty dire! There was not a lot of high-quality material showing up at that time, and the idea that Ticks, a mediocre picture at best, is one of the high points, bears this opinion up!
On the other hand, the picture appeared at the end of an era, trick effects-wise! Ha ha, if it had been made a year or two later, those bugs probably would have been computer-made, would have looked no better than a packet of honeycrunch corn, and consequently there would be little to no reason to watch it today! But for those of us who love little rubber monsters and blood and slime, it works pretty well, because they did a fine job with those tick effects! Ha ha!
A lot of the footage – anything involving Clint Howard, for instance – was shot after the bulk of the movie was made, and it does indeed have a pasted-on feel! But thanks to these shots we get a lot of extra goop and more of the goop sacs too! Ha ha, and that certainly helps!
I can’t suggest this is a very good picture overall, though, and boy do its defects in craft show when you’ve just watched Aliens, with which it shares a scene involving people in a room menaced by a skittering crablike creature! In Aliens it’s scary and suspenseful, and in Ticks, well, it’s not! Ha ha! I give Ticks one and a half flit combs!
Posted by Burl at 01:39