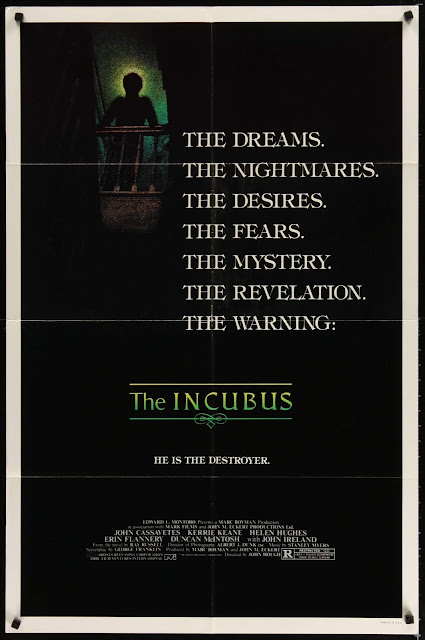 Ha ha, Burl here with a movie that doesn’t exactly offer a lot of laughs! It’s a Canadian picture from 1981 called Incubus, and while you will find sources that claim it’s from 1982 and is called The Incubus (and the poster really pushes that article, ha ha), don’t believe them! My information comes from the credits of the movie itself, which I consider the final arbiter in such matters! And under no circumstances should you confuse it with Incubus, the 1966 picture with William Shatner wearing tights and speaking Esperanto!
These minor matters aside, we’re here to discuss the picture itself, and how good it is! The answer is, ha ha, not very! The picture is set in a small town called Galen, and the lazy autumnal days of life in this cornball burg are interrupted by a horrific series of rapes and murders committed by some inhuman thing! The town doctor, played as a near-crazy person by John Cassavetes, discovers awful internal damage to the rape victims and, now and again, great quantities of unusual sperms!
John Ireland, well-known for appearing in Gunslinger, The House of Seven Corpses and Satan’s Cheerleaders, plays the town cop who seems to have some kind of relationship with each victim! “I’ve known them since they were babies!” he cries at the demise of a pair of teens; or, at the scene of another outrage, “She’s my wife’s cousin!” Meanwhile, Kerrie Keane from Spasms plays a new-in-town newshound, and her reportage on the incidents occasions the worst prop newspaper I’ve ever seen! Keane, who immediately becomes the object of Cassavetes’ sexo-romantic obsession, gives one of the most unpleasant performances I can remember in a female lead! She acts as though she’s trying to be unlikeable, and maybe that’s how she was directed to act! Ha ha, I can’t say!
The cast is fleshed out with a number of faces who will be familiar to anyone conversant in Canadian cinema! There’s the local teen Tim, played by Duncan McIntosh from Bells, who’s having terrible dreams that are connected with the attacks in some way! Helen Hughes from Visiting Hours and Blue Monkey plays his crabby grandma, the matriarch of the town’s first family who is trying to keep the lid on an old scandal! Even Harvey Atkin, extremely familiar from Meatballs and Funeral Home and so much more, gets in on the action as the mayor of poor benighted Galen!
The meat and potatoes of this depressing picture are the attack scenes, and while there’s a bit of grue to liven things up (especially in a farmer-killing scene where, unfortunately, the graphic (fake) pitchforking of a dog is also shown), and a great, if briefly-seen, monster in the Incubus itself, thanks to makeup artist Maureen Sweeney, when you get right down to it there's way too much rape in this movie! Any rape is way too much as far as ol’ Burl is concerned, so having an entire picture built around such scenes is not my cup of tea! And the whole thing wraps up in a dark and depraved twist ending! Actually it doesn’t wrap up so much as it just ends! 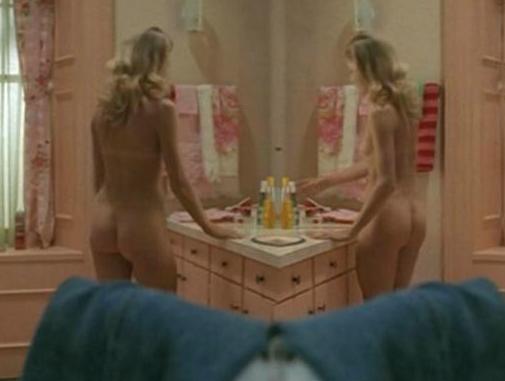 The picture was directed by John Hough, one of those workaday filmmakers who could turn in good work (The Legend of Hell House, Dirty Mary, Crazy Larry), or stinkers (Howling IV: The Original Nightmare), or, mostly, so-so stuff somewhere in between, like Escape to Witch Mountain or Twins of Evil! Well, Incubus, with its dumb dialogue, antisocial performances, lack of atmosphere and general skeeviness, hews much closer to the stinky end of things I’m afraid! I give it one Lil’ Red Express Truck!
Posted by Burl at 13:05