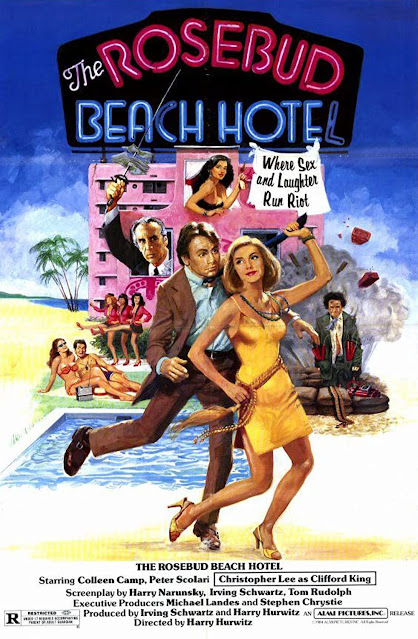 Ha ha, it’s Burl – may I take your bags? Yes, today I have a review of a hotel picture for you, and this is a genre that can run from the trashily venerable, like Arthur Hailey’s Hotel, to the plain old trashy, like Mountaintop Motel Massacre! (A subset of the genre is the off-season hotel picture, and this would include Daughters of Darkness and of course The Shining!) This movie is none of those, however: instead, it’s an eighties comedy called The Rosebud Beach Hotel!

The plot is simple! A nervous nebbish called Elliot, played by bosom buddy Peter Scolari, whom we recall from Ticks, and who here stammers more than any three Hugh Grants, is invited to manage the failing beach hotel of the title! Colleen Camp from D.A.R.Y.L. and Track 29 is his foxy girlfriend Tracy, who at first appears to be the usual snooty, control-freak rich girl, but thankfully is something more! She takes it upon herself to co-manage the hotel with Elliot, unbeknownst to her swordsman father, King! King is played by none other than the magnificent Christopher Lee, whom we recall so well from Nothing But the Night and many other big roles!

Of course Elliot is being set up to fail by King, who has hired a professional arsonist called Matches to burn down the hotel! Ha ha, Matches, played by Hamilton Camp from No Small Affair and City Heat, takes his time getting things ready, so there’s plenty of time for Elliot and Tracy to meet and interact with the wacky employees and guests at the hotel, once the previous manager has gone; and this latter personage is a cameo appearance from Chuck McCann, whom we recall with pleasure from Herbie Rides Again and Cameron’s Closet!

The hotel features a pair of allegedly funny doormen, Leonard and Dennis, played by Jonathan Schmock from Ferris Bueller’s Day Off and James Vallely from Some Kind of Wonderful, and two singing chambermaids played by the Currie sisters, Marie and Cherie! Ha ha, Cherie we remember from Parasite and other pictures, while Marie didn’t have much of a film career beyond this movie, I guess because she was too busy discovering radium, ha ha! Hank Garrett from The Sentinel and Johnny Dangerously plays Kramer, the basement-dwelling survivalist-custodian! Fran Drescher from UHF and The Big Picture and of course Spinal Tap is the local prostitute, who, along with her fellow working girls is recruited to the bellstaff, and Eddie Deezen from I Wanna Hold Your Hand is a freakout guest who claims to be a visiting alien! This claim is later proved correct, ha ha! Meanwhile, the torch man goes into paroxysms of orgasmic delight whenever he spies a flame, and becomes the unlikely object of Drescher’s lust!

The movie is a lighthearted frothcoction with a surprising amount of nudity and a professional cast apparently having fun! It’s a little disheartening to think that Christopher Lee did this and Howling II: Your Sister Is A Werewolf in the same year, but from our twenty-first century perspective we know that Lee and his dignity are invulnerable, and that in any case his career rebounded in fine style! And I like Cherie Curie and all – ha ha, I’ve met her, been to her house, and even directed her in a movie, and I enjoy The Runaways (the band; I haven’t seen the movie) – but the songs she and her sister sing in this movie are all just terrible, and they seem to go on forever! Sometimes they go on forever in conjunction with other things that are also going on forever, like an interminable scene of drunken seductive dancing, ha ha, so that part of the movie gets you down! On the other hand, The Rosebud Beach Hotel might be your only chance to see Fran Drescher and Eddie Deezen exchange dialogue!

It’s got a little more going on than the usual 80s sex comedy, with some good physical comedy from Scolari, a stranger-than-usual Deezen, and Lee doing his thing in his typically committed manner! I can’t say this is a good picture – it sure could use some pep and some extra laffs, and maybe a little bit of style – but as these things go it’s fairly painless! Ha ha, I’m going to give The Rosebud Beach Hotel one and a half exploding palm trees!