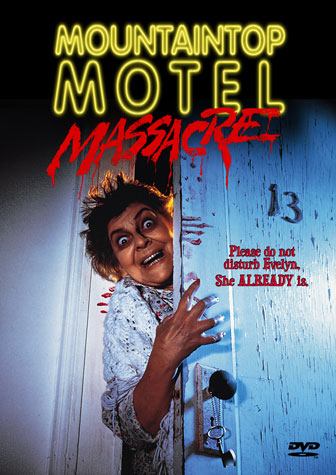 Hi, Burl here with a review of a slasher movie from just past the subgenre’s annus mirabilis, 1982! This one was made in 1983, but I don’t think it got a proper release until several years later! It’s called Mountaintop Motel Massacre, and it provides pretty much exactly that, courtesy of a scythe-wielding crazylady named Evelyn, who runs the grimy titular establishment!
I sort of like this one, because it’s got a different set-up, and ultimately a whole different vibe, than most of its ilk! We learn that Evelyn had a three year stretch in the bughouse and was released in 1981! We find out that her daughter, who’s just as bats as Mother, keeps all manner of animals as pets, and is also a part-time Satanist! Or else she’s trying to revive the spirit of her dead father by way of diabolic means, or something like that! Anyway, we’re left to connect the dots behind this family dynamic, which is fine by me!
The first victim is a harmless guinea pig, which made me sad! I don’t like it when animals get the chop in these movies, but luckily all we see in this case is a splatter of GP blood! Then Evelyn finds her daughter doing a ritual, and that sends her into a fit, at the end of which the daughter has been given an accidental poking! Well after that, it’s game on! All that’s left is for the various victims to arrive, set themselves up in the filthy, horrible cabins of the Mountaintop Motel, and wait for batty Evelyn to pop up from the bathroom trapdoors and do her thing!
The parade of choppees includes a hefty preacher who likes to suck directly from a bottle of Old Granddad every chance he gets; a self-described gentleman carpenter who was probably my favourite character; a pair of newlyweds who reminded me of the ones from Maximum Overdrive, except the bride was less annoying and wasn’t played by Lisa Simpson; two young ladies whose hopes of becoming country music stars were doomed even without the stopover at the murder motel; and a slickster city boy who pretends to be the owner of Columbia Records to woo the young warblers! Ha ha, in such situations it’s usually safer to pretend to be just a producer or perhaps a lower-level record executive, but wouldn’t you know, those ladies half-believe his story anyway!
Evelyn starts things off not with killing, but with a program of fauna-based harassment! She releases snakes, rats and roaches into the various rooms, chuckling as the guests wake up to these unsavory animal surprises! Ha ha, the carpenter gets the roaches, emerging from slumber to find himself covered in them, and where I’d have gone screaming out the door this mighty man merely brushes them off and grouses that “they oughta call this a roach motel!” Anyway, that scene literally made me squirm, and I have to say that was one brave actor!
After all that it’s hand-sickle time, and there are a few pretty gory moments, like when the newlywed bride gets the scythe through her cheeks! There’s a chopped-off hand, a slit throat, a sliced face and a poked tummy! Finally a hefty sheriff arrives and helps out, taking over from the guy who was sort of set up to be the hero but then disappears for a stretch, later reappearing to claim that he’d knocked himself out by accident! That sounds like an attempt at complex plotting or a red herring or something, but I’m pretty sure the actor had to attend a wedding or other event that kept him away from the set as they were shooting the climax, so the sheriff simply took over!
This picture was shot in Louisiana I think, and in any case has a good regional vibe to it! So it’s got that going for it, and some weird touches and a few unconventional aspects, and of course a little of the red stuff! On the debit side it’s a little slow in parts, and just plain not very good in most others! But it has a certain je ne sais quoi, and for that I’ll award this goony-bird two amazing vintage ca-trucks!
Posted by Burl at 12:57