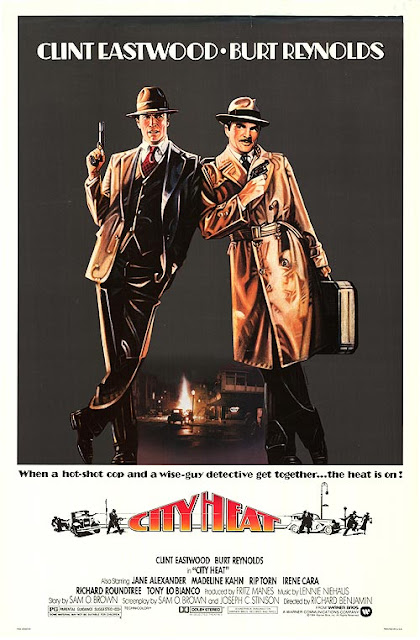 With a bathtub gin in hand, it’s Burl, reviewing an 80s action-comedy nobody thinks too much of! I recently read an interview with the director, Richard Benjamin (who brought us The Money Pit, and also acted in pictures like The Last Married Couple in America), and he likes it; but he might be the only one! Well, to tell you the truth, he said he was proud of it because it was the only collaboration between Clint Eastwood and Burt Reynolds, and that’s not the same as liking it, is it! Ha ha! Anyway, the movie I’m talking about here is City Heat, which you probably already guessed!

The story is laid in Kansas City round about 1933, and so of course there are gangsters, shamuses, cops, and hot jazz licks! Good old boy Burt, who was just getting ready to embark on his unofficial trilogy of single-word titles, Stick, Heat and Malone, is the shamus, and that fits because he’d once appeared in a movie called Shamus! That old leatherbag Clint, fondly recalled from Tightrope and In the Line of Fire, once again portrays an iron-nosed cop; and these two superstar lawmen naturally despise each other, the reason for the antipathy being mostly an “Of course they hate each other, it’s that kind of movie” thing!

They get drawn into a plot that never has much narrative energy or makes much sense, I’m sorry to say! There are two gangster bosses involved, one played by Rip Torn from Summer Rental, the other by Tony Lo Bianco, the director of Too Scared to Scream; and there are some kind of ledger pages, just like in The Untouchables! Richard Roundtree from Maniac Cop plays Burt’s partner, who goes out the window thanks to shady dealings with hoodlums! Roundtree’s ladyfriend, a sweet jazz warbler played by Irene Cara, is in hiding lest she be next on the hit list, and it’s up to Burt and Clint to get over their mysterious differences to protect her, and to nab whichever of the mob bosses has done whatever it was they did wrong according to the ledger pages! Or something, ha ha!

There’s a whole gallery of familiar mugs, most of them aptly cast as henchfolk! William Sanderson from Blade Runner; Nicholas Worth from Darkman; Robert Davi from Die Hard; Art La Fleur from Cobra; Jack Nance from Ghoulies: all these old boys get a look in! The action scenes are occasionally elaborate and enjoyable, but mostly take the form of poorly-staged gunfights which alternate between shots of all the participants either firing a bullet or reacting as a bullet strikes near to them! And the comedy is about on the level of the gunfights: a bunch of pointless sniping between the leads, but no real chemistry! Ha ha, even Johnny Dangerously is funnier, though that doesn’t have Burt Reynolds prowling a bordello in a Big Bad Wolf outfit!

Many of the picture's problems come from not just a bad script, but from an accident that happened early in the shooting, when an actor picked up what was supposed to be a breakaway chair but wasn’t, and clobbered Burt with it! He went down for the count, and then for the whole rest of the filming was listless and low energy! Poor Burt’s misfortune affected the whole picture, and the result is the limp rag you see whenever you watch this blighted coxcomb! They spent a lot of money on it, so you may expect the pleasures that come from that, but the primary impression is one of potential wasted! I give City Heat one and a half snot ball competitions!