Burl reviews Howling II: Your Sister Is A Werewolf! (1984) 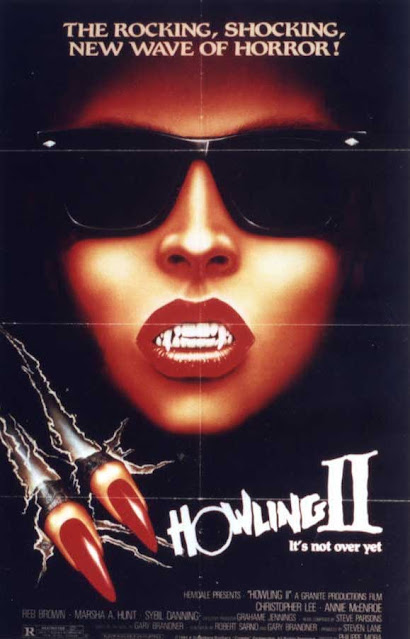 Ha ha and hairballs, it’s Burl, suffering from a case of sequelitis! You know, most of the time there’s a drop-off in quality between the first movie in a series and the subsequent entries! Ha ha, look at Jaws, an excellent movie with a mediocre sequel and then, ultimately, Jaws: The Revenge! Pew! Nearly as steep is the plunge from the heights of Joe Dante’s wonderful The Howling directly to the sewage pipe known as Howling II: Your Sister Is A Werewolf! Ha ha, can you feature it!

The story is thus: in the aftermath of the first movie, which ended with a newslady transforming into a werewolf while on a live telecast, then being killed with a silver bullet, the newslady’s lunkhead brother Ben, played by Reb Brown from Fastbreak and The Sword and the Sorcerer, and his girlfriend Jenny, essayed by Annie McEnroe from Snowbeast, are approached by none other than Scaramanga himself, Christopher Lee, known to us from such diverse fare as The Man With the Golden Gun, Desperate Moves, and The Gorgon! Lee’s character, Stefan, explains to them that the sister was a werewolf and that they must travel to Transylvania or somewhere so they can kill the queen werewolf, Stirba!

Of course this is a little hard to swallow for the lunkhead couple, but a visit to a punk club called the Slammer, with the names of top acts like GBH, Black Flag, and The Cramps scrawled all over the walls, and where the house band, Babel, sings a song of lycanthropy, soon sorts that out! Then it’s off to central Europe, just in time for a village festival featuring some of the gooniest dancing you’ll ever see! Here they meet an oddment of characters, including a helpful but ill-fated dwarf, and some nefarious fur-sprouters played by the likes of Marsha A. Hunt from Dracula A.D. 1972 and The Sender, Ferdinand Mayne from Frightmare, and Judd Omen from Seems Like Old Times! Ultimately the goal is to kill the werewolf queen Stirba, played in a series of brain-melting outfits by Sybil Danning from Talking Walls!

It’s no easy task to destroy all these monsters! Thanks to a mumbled curse, the poor dwarf has the worst day ever, one so bad that his eyeballs exploding is not the worst thing that happens to him! Stefan assembles a little anti-werewolf brigade and arms them with titanium weapons (the only thing that can kill a werewolf, according to this movie’s hastily extemporized mythology), and then werewolves start popping out of the bushes, spoiling for a fight! At the end of one typically incoherent action scene, in which werewolves are blasted, chopped, poked, and hacked, the lunkhead lets loose with a hysterically triumphant scream, “I told you we’d get these fuzzballs!”

But there’s still Stirba, werewolf bitch, to contend with, and since Stefan is her brother he’ll take care of that! And none too soon, because, ha ha, it’s a true croque-en-boeuf, this picture! Unbelievably poor editing and direction gives it a distinctly ESL feel, as though it was a three-hour foreign film cut down to ninety minutes for North American blockheads with no attention span! The script is monumentally dumb, and it all seems a concerted plot to make Christopher Lee look goofier than he has on screen since donning the reservoir-tipped hat in Starship Invasions! However, the man’s boundless reserves of dignity keep his honour intact, though the other performers are not so lucky, ha ha!

It’s a bad movie and the people who made it should feel bad! How could the director, Philippe Mora, have gone from the entertaining transformational antics of The Beast Within to this? It’s a puzzlement, as it always is when someone’s sense of craft completely deserts them! However, some of the trick effects are entertaining, and Christopher Lee is always a pleasure to watch, so it’s not completely without worth! I give Howling II: Your Sister Is A Werewolf one pair of new wave fancy-glasses!