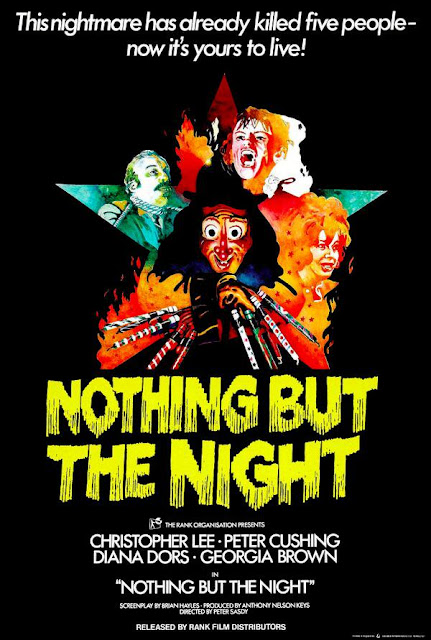 Ha ha, it’s Burl here with another tale of dark doings amongst the rocky crags of Blighty! This one is not only from the same director as Doomwatch, it was largely shot in the same place, though here it’s not meant to be Cornwall, but the mid-northern reaches of Scotland, on an island called Bala! The picture is called Nothing but the Night, and it was the first, last and only picture produced by Christopher Lee’s sort-lived Charlemagne production company!
Lee, whom we know from Desperate Moves, Starship Invasions, The Gorgon and so many others, is investigating a series of accidents and suicides which he believes to be murders! Ha ha, we know he’s right, because we see these crimes taking place, though we don’t see anything more than the giallo-like black gloves of the perpetrator! In the meantime, a very special orphanage becomes the epicenter of the mystery after a bus driver spontaneously conflagrates and the bus crashes into a ditch!
All of this has to do with the group of elderly trustees who run the orphanage, and one young girl in particular who’s suffering from terrible nightmares! Ha ha, a hypno-doctor played by Peter “Star Wars” Cushing puts the girl into a state, then declares that her nightmares seem to actually be someone else’s memories! This girl is not herself an orphan – her mother is a murderess played by a perpetually disgruntled Diana Dors, whom we all know from Swedish Wildcats! Dors becomes the prime suspect in another murder, and the next thing we know she’s crawling around the island, taking forever to get nowhere!
You may well be wondering just what’s going on in this crazy plot! Well, the reveal of what’s actually happening is one of the best parts of the picture, so I’m not sure if I should give it away! I’ve alluded to it already, so we’ll leave it there I suppose! Other strong points this picture has to offer include the dingy 70s British atmosphere and the strong cast! Not only do we have Cushing and Lee, here playing buddies rather than arch-enemies, but also such merriweathers as Michael Gambon from The Life Aquatic with Steve Zissou playing a super-competent cop, and Fulton McKay from Local Hero as an islander!
On the debit side we have a plot that meanders much too much, and spends a lot of time with the disagreeable Dors, whose character adds little to the narrative and less still to the mystery! Nevertheless, I was in the right mood to be pulled in and to enjoy the incidentals while wondering where the plot would go, and while the revelations are pretty raggedy, there’s some strong imagery in the last act that sort of carries it through!
It would be pretty fun to have a Bleak Early 70s British Craggy-Coast film festival, into which you’d program this picture, Doomwatch, The Wicker Man, Tower of Evil and probably others! I wonder how Nothing but the Night would stand up against those others! On its own, I think I’m going to give this compelling but bumbling picture one and a half terrifying tug-o’-wars!
Posted by Burl at 08:44