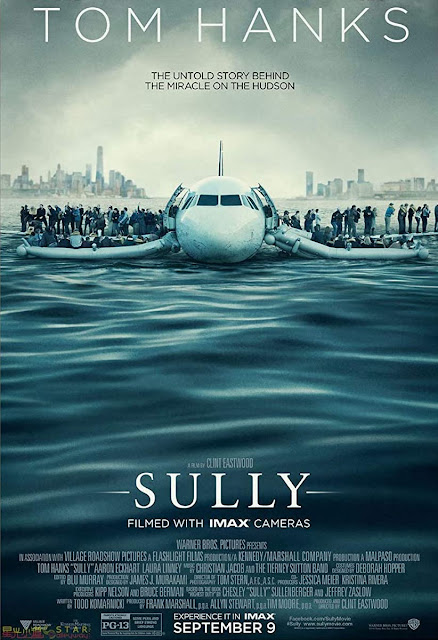 Heading for runway two-niner, it’s Burl, reporting birdstrike from the sky! Ha ha, it’s a real-life disaster movie – or is it? Those of us who remember watching the news in early 2009 remember that it wasn’t a disaster at all, but a heartening story of competence! Yes, it’s a picture from the man who reinvented himself as a chronicler of ripped-from-recent-headline stories, and this, as far as I can tell, is the best-regarded of them: by garr, it’s the fabulous story of Sully!

Yes, it’s Sully Sullenberger, Airplane Pilot, and who better to essay him than Tom Hanks, the fellow we recall from Dragnet and Big and pictures like that! Why, Hanks already had the real-life-pilot-wrings-triumph-from-disaster angle covered in his portrayal of Jim Lovell of Apollo 13! Like Lovell, Sully keeps a calm head and is helped by his even-keeled co-workers, and from the oncoming rush of too-certain tragedy comes the joy of unexpected survival – a water landing from which the aviatrons emerge smiling!

You recall the story: in January of 2009, a flight takes off from La Guardia airport in New York, and instead of its intended destination, Charlotte, a capitol of one of the Carolinas I believe, the airplane is struck by passing birds and, bereft of thrust, is forced into the icy waters of the Hudson River! Injuries are minor and fatalities nil, and pilot Sully Sullenberger is hailed as a hero! But wait – the Red Cross blankets draped across the shoulders of the survivors are not the only wet ones in this story, because various authorities, especially those concerned about insurance costs and so forth with regards to the plane, ask whether Sully and his co-pilot could not have returned to the aerodrome even in their bird-crippled state! By the end of the picture it is revealed that the pilots did all the right things, and their reputations and hero status remain intact!

Aaron Eckhart from Olympus Has Fallen is the co-pilot of Mustache Air flight 1549, and he provides a stolid backup to Sully, a faithful wingman, someone for him to talk to! Laura Linney from Congo is the worried Mrs. Sully, whose scenes are all on the telephone and who doesn’t get to do anything but fret from a distance! Ha ha, it’s a bit of a nothing part, but Linney is a good actor and does what she can! And of course the picture is directed by Clint himself, who as a filmmaker has brought us many pictures: some of them very good, others more like Blood Work! And yes, as mentioned above, of his ripped-from-the-headlines pictures, which include one about the terrorists on the train to Paris and another about the security guard who was thought to have planted a bomb, Sully is the one people thought was pretty good!

Maybe that’s because Sully himself was such a readymade white middle-aged man hero, and therefore perfect to be played by Hanks! Hanks is good in the role, but there’s not all that much to the man aside from being a good and dedicated pilot who’s certain of the rightness of his actions aside from one or two moments of doubt! The picture is assembled in such a way as to break the actual crash and rescue into sections, one of them from the perspective of the La Guardia tower; and occasionally we are privy to the explosive visions with which Sully is occasionally assailed – snapshots of how the disaster might have unfolded if everything hadn’t gone exactly right in the aftermath of the birdstrike!

Like most Eastwood pictures, it’s a competent but unspectacular work! It certainly doesn’t wear out its welcome – at 93 minutes, including credits and explanatory titles, it qualifies as a miniature in the Eastwood oeuvre! It’s a fine piece of reportage, very basic in its themes and emotions, and carries nearly to a fault an abhorrence of nuance or complication! It’s no Unforgiven, ha ha! Still, I’m going to give Sully two and a half cries of “Heads down, stay down, brace, brace, brace!”