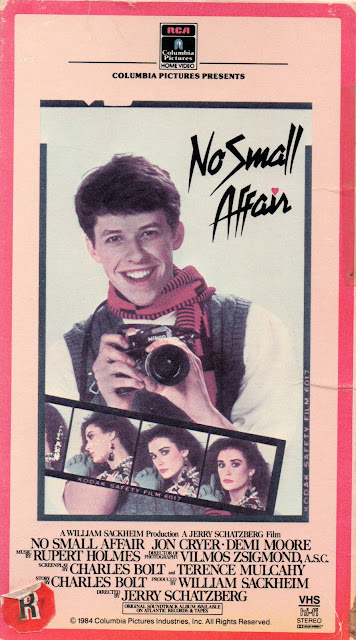 Hi, Burl here to have a look at another one of those 80s teen comedy romance pictures that the major studios churned out in an effort to emulate John Hughes and other such gurus of youth! Ha ha, this one, No Small Affair, reminds me a bit of Secret Admirer in that way, except, in order to cast its net still wider, it includes a dash of irrelevant nudity!
No Small Affair features that rascally ducktailed scamp Jon Cryer, the poor man’s Broderick some say, and well-known to all as the star of pictures like Morgan Stewart’s Coming Home and Heads! And here he is in a movie from the director of Panic in Needle Park, and shot by the venerable cinematographer of McCabe and Mrs. Miller! Ha ha, he must have felt he was in the big time and no mistake! It wasn’t all downhill for him from here by any means – Pretty in Pink was still two years in the future, after all – but rarely or never again would he headline a studio picture like this, much less with Demi Moore as his co-star!
Cryer plays a perpetually sarcastic poor little rich boy who styles himself a photographer and attempts to back up this dubious self-designation by taking snaps of everything he sees! His mother is a purse-mouthed hag, a refugee from the Golden Girls who is making sweet love every day to Jeffrey Tambor, who in turn gets several shirtless scenes! But Cryer is out one day wildly snapping his shutter this way and that when he happens to catch a photo of Moore, who is having a dreadful argument with her boyfriend! Well, when he develops the picture and sees her face, he gets hearts in his eyes and begins the pursuit!
From here the young Cryer has to dodge the owner of the club in which the manly-voiced Moore sings her bone-scrapingly awful rock songs, and this portly fellow is played by Norm from Cheers! But here Norm is not quite as jolly as we’re used to him being, and he also grabs Moore’s bum at one point! Ha ha, Norm would never do that in Cheers, I don’t think! But the shutterbug uses all the talents at his disposal to find Moore, attract her attention and then capture her heart! And all the while he has to deal with the upcoming marriage of his noogoodnik brother to E.G. Dailey – no Pee-Wee, he! – as well as the ridicule of his frienemy Tim Robbins and the erotic attractions of Jennifer Tilly in nerd drag! (Ha ha, he romanced Jennifer Tilly in Heads also, if I recall correctly, that lucky duck!) So there’s some pretty typical 80s movie chaos! But it’s all kind of sluggish for a supposed comedy, and given the pedigree of the director and cameraman, one can’t help but feel it was pretty phoned-in by these guys! The scriptwriters too were on autopilot from the looks of it, as all the bases are hit with paint-by-numbers accuracy! There are some nice San Francisco locations and the supporting cast is pretty good, but it’s a little more drab and sluggish than it really needs to be! There are some okay moments, but ol’ Burl has seen better! I give No Small Affair one and a half pictures of flies!
Posted by Burl at 23:35