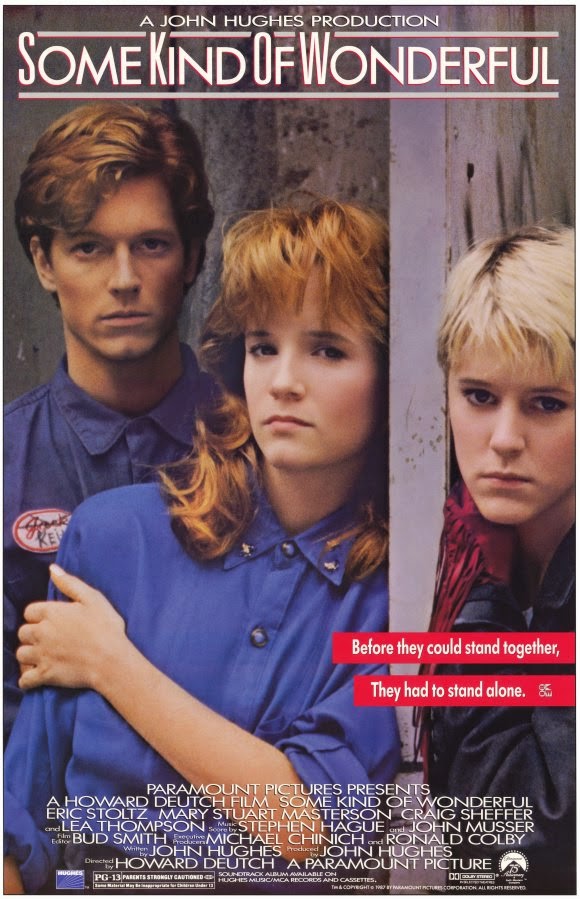 Hello, and a good day to you – it’s Burl! Ha ha, I’m here to review a movie that’s, curiously, quite close to my heart! That doesn’t mean I think it’s particularly good, or that I’d go so far as to recommend it to others, but I have a real soft spot for the thing! It’s a John Hughes picture – one he wrote and produced but did not direct, it should be noted – and it’s called Some Kind of Wonderful!
I recall seeing the picture on a double bill with something else, maybe that ape movie, Project X! I really should have been on a date to see that double feature, but I don’t think I was! Maybe I couldn’t think of a girl whose taste would encompass both movies; but that would have been a complete failure of imagination on my part, and a woeful underrating of the young ladies with whom I was schooled!
The main thing I loved about the picture was Mary Stuart Masterson, who may not have made a very convincing drummer, ha ha, but who looked terrific in a chauffeur suit! Heaven Help Us indeed! She plays Watts, presumably named after Charlie Watts, a young lady who speaks in goofy pseudo-epigrams (“Ha ha, don’t mistake paradise for a pair of long legs!”) and, judging from her drum head, is a Love & Rockets fan! In the 90s I knew and was powerfully attracted to a number of ladies with cropped, bleached-blonde hair, and I believe this character is to thank for that particular romantic avenue!
Anyway, if you’ve seen Pretty In Pink, the plot will seem familiar to you! (I hadn’t, and still haven’t seen that particular movie, so the repetition didn’t bother me!) There’s a young fellow, a working-class rapscallion named Keith, who has the aforementioned Watts for a best friend, but pines for a blowdry beauty called Miss Amanda Jones, just like in the Stones song, ha ha! The big twist is that, though Amanda moves among the rich and has a wealthy, perfidious boyfriend she herself lives in a literally wrong-side-of-the-tracks neighbourhood! Watts, meanwhile, secretly loves Keith, but he’s blind to that fact, and also to her infinite superiority to Miss Amanda Jones, to the point of seeming a little dull-witted!
Eric Stoltz, well known from The Wild Life, plays Keith, giving a strange, soft-spoken performance that’s out of place in a teen film, but welcome for precisely that reason! The twist with his character is that when he unveils his portrait of Miss Amanda Jones, it's hilariously misproportioned and generally terrible! Ha ha, I love Movie Art! John “Beverly Hills Cop” Ashton plays Keith’s dad, who’s obsessed with getting him into a business college, but Keith is more interested in being an artist than any post-secondary education! (Ha ha, art school seems never to have occurred to him!) The twist with his character is that he’s not on the whole a bad guy, and also that he doesn’t give up his pro-business school stance at the end of the picture!
The other thing I really liked about the picture was the soundtrack! Ha ha, plenty of great tunes, and a really great pennywhistle version of the Elvis standard “Can’t Help Falling In Love!” It was also quite nice to see the threatening thug characters led by Elias Koteas, who I suppose are meant to be punkrockers (a caste Hughes never successfully grappled with!), turn out to be extraordinarily helpful, nice guys! Ha ha, as an art-class punkrocker myself, I quite appreciated that!
Howard “Grumpier Old Men” Deutch was the director, and he manages to pull off a reasonable, if bland, simulacrum of the Hughes style! It might have been interesting to see a little more pep in the thing overall, but I guess you can’t have everything! It’s hardly a groundbreaking picture, but it hit me in the sweet spot back in my happy schooldays, and so I give Some Kind of Wonderful two and a half mongers!
Posted by Burl at 23:56