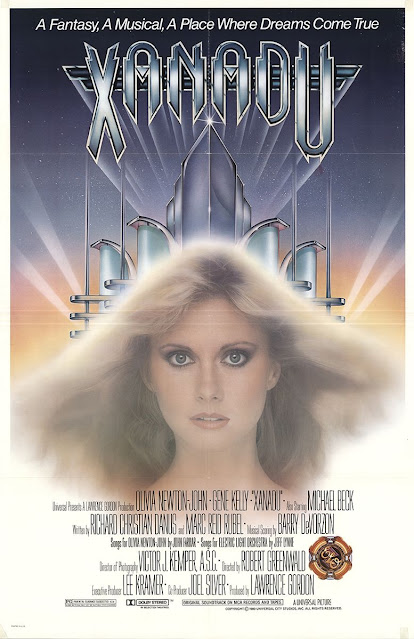 Wrapped in swirling ribbons of pastel neon, it’s Burl, here to review a curious quilici that was, and could only have been, released in the bizarre transitional year of 1980! I was among those few who saw this goofnugget on the big screen, for it played my local cinema in the days when I would walk down the block and see whatever happened to be playing on a given Saturday afternoon! Other such pictures included In Search of Noah’s Ark, The Bad News Bears in Breaking Training, Race For Your Life, Charlie Brown, On the Right Track, and Sasquatch: The Legend of Bigfoot! However, the item I’m going to try describing for you now is called Xanadu!

Being from the temporal-cultural crossroads of summer 1980, this is naturally a disco picture, but equally naturally, not only a disco picture! Like Roller Boogie, it’s a roller skating movie too, but it looks forward into the coming decade by virtue of a certain sort of feather-haired weirdness! Ha ha, I think it was doing its best to predict what the fashions and fads of the 1980s would look like, and because it was trying so hard, its guesses were bizarre and strange and not very accurate! The timelessness it sought ended up dating it precisely, ha ha!

The late Olivia Newton-John, whom we recall from Grease and from Two of a Kind, is in the picture, but she’s not really the main character! In fact, she’s not much of a character at all, ha ha! It's really the story of a blockheaded painterman played by Michael Beck from The Warriors and Megaforce who works in a strange factory environment in which he and other artists, including Friendly Fred McCarren from The Boogens and Class Reunion, reproduce album covers onto large canvases for some reason! They’re overseen by a nasty boss called Simpson, who does his best to crush any lingering artistic ambition his stable of industrial daubers might still possess!

Strolling the beach one day, Beck meets up with Gene Kelly, the legendary footstomper from Summer Stock, Singin’ in the Rain, and of course Viva Knievel! Then he’s knocked down by a rollerskating Newton-John and becomes instantly smitten, and thereafter he keeps alternately running into either Kelly or Newton-John and develops friendships with them both! Kelly turns out to be a retired musician who is also, conveniently enough, fabulously rich, and harbours dreams of opening the nightclub to end all nightclubs; and Newton-John, it turns out, is actually Terpsichore, one of the nine muses of Greek legend!

All of this comes together, sort of, when Kelly and Beck team up to create Xanadu, where disco and 50s-era rock are melded together into one goofball farrago that resembles not a whit what 80s culture would actually turn out to be! The last half hour is mostly dancing around, and there’s some impressive hoofstomping, but it’s mostly just a cavalcade of synthetic pageantry that adds up to nothing more than vaguely annoyed bafflement!

I know a lot of people like this movie, but I’m not entirely sure why! To me it fits right in with dire musical oddities like Can’t Stop the Music, Sgt. Pepper’s Lonely Hearts Club Band, and The Apple, and, funny as they may be, we must admit that none of those are very good! Xanadu largely squanders the talents of its cast (though I believe it was Kelly’s own desire not to do much dancing) along with whatever fantasy-romantic promise its mythology-based concept had, and that’s tough to fully forgive whatever ancillary charms the movie may (or may not) possess! In the end I can only give Xanadu one single animated pastel-neon ribbon!

Email ThisBlogThis!Share to TwitterShare to FacebookShare to Pinterest
Labels: 1980s, fantasy, goofy, musical, romance, saw it on the big screen