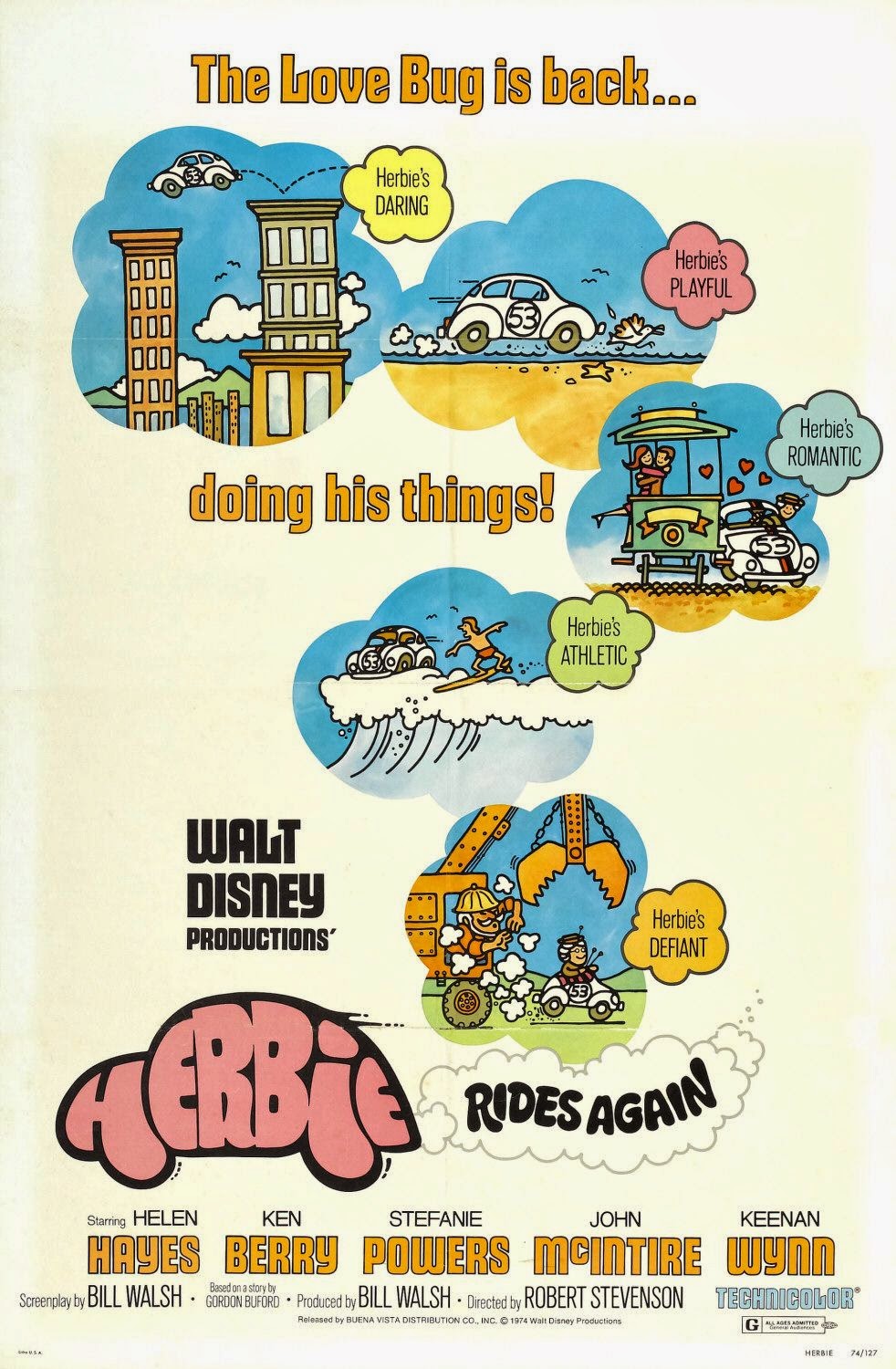 Beep beep, it’s Burl! Ha ha, I’m here to review a motor-vehicle classic for you, the second Herbie picture (after The Love Bug), Herbie Rides Again! Ha ha, I’ve never been quite clear on why Herbie was known as a love bug, but I suspect it has to do with the hippie times in which his first picture was released!
He does perform some love-related duties here, mostly by not interfering with the burgeoning romances offered up by the plot! Now, it’s been a while since I saw the first picture, but I seem to recall it involved racecar driver Dean Jones discovering to his amazement the sentience and unbelievable physical abilities of the little gray 1963 Volkswagen Bug, which he then employs to win both races and hearts!
Jones is forgotten in this sequel, and Herbie’s ownership papers have somehow been transferred to a little old lady, Mrs. Steinmetz, who lives in a former fire hall in the middle of a wasteland somewhere in San Francisco! The wasteland is there because nasty developer Alonzo Hawk, played by the great Keenan Wynn of Piranha and The Dark, is preparing to build a soulless double-tower edifice on the site! But Mrs. Steinmetz, who lives in the firehouse with a young lady named Nicole (played by Stefanie Powers, who is of course well-known for her part in Palm Springs Weekend), won’t sell, and that makes old Alonzo, who’s blustery at the best of times, so red-faced and apoplectic that you'd think he’s like to burst a valve, ha ha!
Enter Ken Berry, a man so radiating earnest good-naturedness that he might have been machine-tooled to be a Disney hero, who plays Alonzo Hawk’s naïve nephew Willoughby! Willoughby starts out trying to convince Mrs. Steinmetz that she should give up the firehouse, but after Nicole beats him with a lobster he realizes the error of his ways and commits himself to protecting the firehouse from his uncle’s depredations!
With all the pieces in place, Herbie himself rather belatedly swings into action! There are marvelous trick effects as the little bug pops wheelies and screeches through parking garages and fancy restaurants, and up the sides of gullies, buildings and the Golden Gate Bridge itself, where he has chased a passel of lawyers! The climax sees Herbie raise an army of fellow Herbies to go after the heavy construction machines which have the firehouse surrounded and are about to bash it to flinders!
I’m pretty sure I saw this picture at some impressionable age, because it really helped form my opinion of real estate developers (don’t care for ‘em!) and San Francisco (attracted to it!), while also giving me an abiding fondness for Herbie himself, who consistently looks great while never being too cute; and also an appreciation for the steely, grainy, richly contrasted look of late 60s / early 70s Disney cinematography!
And the cast is terrific! Berry and Powers are perfectly adequate, but Helen Hayes is marvelous as the old lady, and Keenan Wynn shouts too much perhaps, but he’s always a treat! There are nice turns from John McIntire, who was the sheriff in Psycho, and such performers as Huntz Hall (from Gas Pump Girls) and Chuck McCann (from Lunch Wagon)! And Don Pedro Colley turns up wearing an expensive suit and puffing cigars in the role of “Barnsdorf!” And guess who cameos as a surprised surfer? The Baby himself, from that movie The Baby! Ha ha, wow!
It’s an entertaining little kiddiepic, with the highlight being Keenan Wynn's epic Herbiephobic dream, in which the sheep he is counting to fall asleep become first Herbies with Jaws-teeth, then chanting, hatchet-tossing headdress-wearing Herbies, and finally a buzzing swarm of flying Herbies which surround the now-gigantic, finally aphasic Wynn as he growls and bats away at them from atop the Empire State Building, until he is blinded by their jets of oil and spins downward with a final, maniacal death-scream! Ha ha! I’m going to award Herbie Rides Again two and a half extra-wide building ledges!
Posted by Burl at 16:09