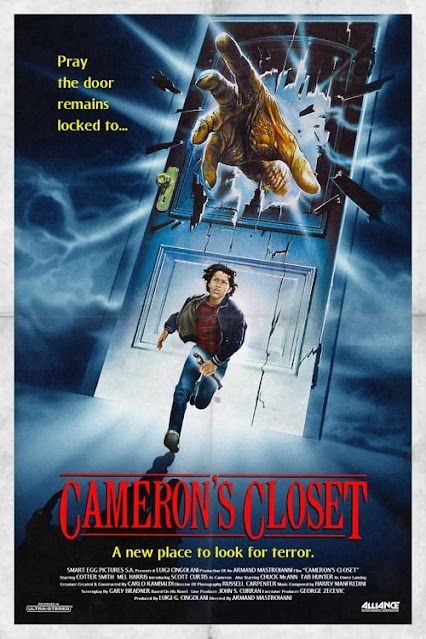 Hello closeteers, it’s Burl, here to catch up on some 1980s horror I missed the first time around! Or else I may have seen it and then completely forgotten it, ha ha! At any rate, I got my hands on a VHS copy of Cameron’s Closet and recently watched it, and I’m here to tell you all about it!

It comes from the director of He Knows You’re Alone and The Supernaturals, and I suppose it represents a slight step up from those works! It’s a bit more elaborate at any rate, but not to any great effect I’m afraid! The picture opens by introducing us to Cameron, a ten year-old boy with astonishing psychic powers who’s being studied by his father and a scientist pal! Cameron can put marbles in a jar or rearrange plastic letters merely by will alone, ha ha, but evidently his talents also extend to raising evil closet demons!

This is where his dad, played by Tab Hunter from pictures like Ride the Wild Surf and The Kid From Left Field, and the researcher pal, essayed by Chuck McCann from Herbie Rides Again and Lunch Wagon – in truth a good actor, but also the poor man’s Robert Prosky – start to get worried! Soon Tab is dead, his head cut off by an errant machete, and Cameron is off to live with his mom, played by Kim Lankford from Malibu Beach! The mom has a meathead boyfriend who venerates his car above all else, and one night he gets his eyes burned out and is fired out Cameron’s bedroom window as though from a cannon, landing of course, ha ha, on his beloved car!

Well this brings Detective Talliaferro, played by Cotter Smith from The Post, in on the Cameron closet case! He’s been having waking closet nightmares, which annoys his partner Leigh McCloskey (from Inferno and Fraternity Vacation), and is being forced to attend sessions with police psychiatrist Dr. Nora Haley, played by Mel Harris from Wanted: Dead or Alive! After Talliaferro’s partner runs afoul of the demon in Cameron’s closet, the investigation is on, and after further deaths, including one by interior superboil, and a near-chopping by ceiling fan of Cameron himself, the final confrontation is on!

Ha ha, this is an American picture, but there are a lot of Italian names in the credits, and the pastaland influence is everywhere evident! Cameron himself isn’t an evil child, but there are enough glowing eyes and psychic shenanigans to recall The Visitor (though it never gets as loopy, of course, because what could), and Cameron himself is terrorized nearly as much as little Bob in The House by the Cemetery! Thanks to the competent work of later-to-be-superstar cinematographer Russell Carpenter and a generally solid set of actors (even Cameron is pretty good!), the movie rises above its budget; but it’s when the demon itself comes onto the scene that things falter! He’s a creation of Carlo Rambaldi, who brought us such lovable animatronics as E.T., but on this job I think he may have been a bit drunk! The thing looks like a big raisin with teeth, as though he brought his creature from Possession out of a long, imperfect storage and gave it a quick coat of red-brown housepaint before shoving it in front of the camera! Ha ha!

It’s narratively incoherent, frequently derivative, and often stupid, but it’s got some zest and pizazz here and there, with the eyeless meathead shooting out the window a particular highlight! The trick makeup effects range from mannequin-style (the machete decapitation) to sort of scary (a smiley zombie creature), but are pretty delightful at either extreme! It’s dumbbell horror and there’s no denying it, but I give Cameron’s Closet two refitted He-Man dolls anyway!