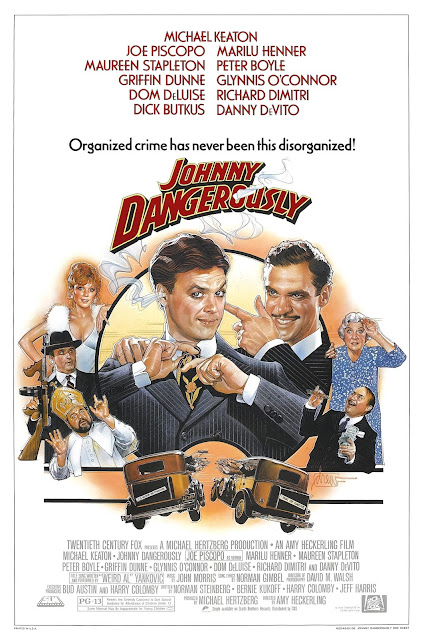 All bastiges be on the lookout! Ha ha, yes, it’s Burl here to review a mid-80s would-be crazycomedy that tries to play in the sandboxes already occupied by Top Secret on the one hand and, let’s say, City Heat on the other! Now those are two very distinct sandboxes, so it’s no real surprise that today’s picture, Johnny Dangerously, can’t really pull off whatever it’s trying to do!

The very first gag, with an ahh-oooga car crashing into the numbers “1935,” primes us for a Zucker-Abrams-Zucker free-for-all, which the movie only sporadically delivers on! It’s a flashback picture, with a pet store owner played by Michael Keaton from The Paper telling a local rapscallion the story of his entrée into the gangster lifestyle, which arises from a need to pay for the constant medical treatments required by his old Irish washerwoman ma, played by Maureen Stapleton from Interiors and The Money Pit!

We follow Johnny’s adventures as he bonds with his crime mentor, Jocko Dundee, essayed by Peter Boyle from Outland, romances a songbird called Lil, undertaken by Marilu Henner from L.A. Story, and clashes with his primary enemy, Danny Vermin, as personified by Joe Piscopo from Dead Heat! In the meantime Johnny’s little brother, played by Griffin Dunne from An American Werewolf in London, goes through law school and becomes a crime-fighting assistant D.A.! And among all this we get malapropisms galore from a rival crime boss, and this truly was the only element I could recall from seeing the picture on home videocassette with my friends back in 1985 or so! (Ha ha, I suspect we rented it from the 7-11 at the end of Dave's street!)

There are lots of cameo appearances from familiar people, like Danny DeVito from The Van and Ruthless People as a corrupt D.A., and Ray Walston from Silver Streak as an afflicted news vendor, along with Dick Butkus from Gremlins 2, Joe Flaherty from Club Paradise, Jack Nance from Ghoulies, and Alan Hale Jr. from The Giant Spider Invasion! The trouble is that the movie invites very few horselaughs, though there are smiles to be found here and there! The performers all try hard, but can only do so much when the movie around them is so bereft of pep, wit, or craft! (Brian De Palma apparently loved it however, and hired Piscopo and De Vito to be in his own gangster comedy Wise Guys on the strength of their performances here! Ha ha!)

It’s trying to parody the Warner Bros. gangster pictures of the 30s, but nobody involved seems to have watched very many of them beyond The Public Enemy, Angels With Dirty Faces, and the 1949 throwback White Heat! There’s no atmosphere in the photography, which looks more Channel 5 than chiaroscuro! And I’m afraid it simply isn’t uproarious enough! The picture has its moments, but too few of them by far; and I know some people are fond of it but me not so much; and so after all this is calculated I award Johnny Dangerously only one and a half fargin iceholes!