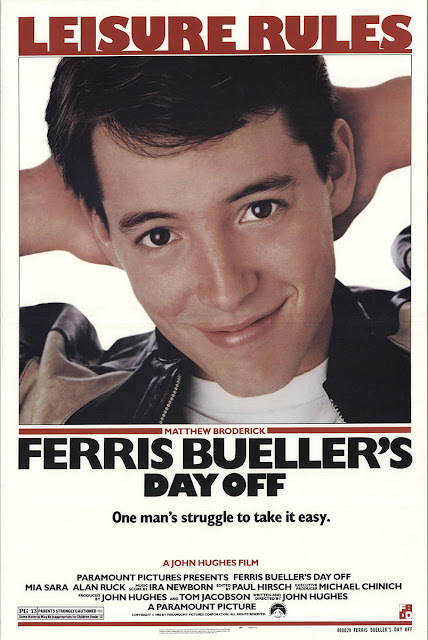 Ha ha and houndcakes, it’s Burl here to review the famous teenage shenani-comedy Ferris Bueller’s Day Off! It’s a movie beloved by many and reviled by nearly as many, and its central character is a figure of controversy even today! Is he a charming rogue kicking against the pricks, or an entitled, kick-worthy prick? Is he an attention-seeking rich boy? A clever dweeb with a romantic soul? A sprightly free spirit? A natural-born leader of men? A whiny, spoiled bully-brat? Is he all of the above and therefore surprisingly realistic in his complexities, or a cartoon cardboard cutout cliché the likes of which has never actually walked the earth?
Matthew Broderick, the open-faced actor we may remember from Godzilla, plays this multifarious figure, this Puck for the 1980s, this insidious, ism-allergic exemplar of Reagan-era privilege! He decides to take a day off from school one fine morning, and neatly fools his gullible parents with well-rehearsed sickboy routines! His sister, a psychotically resentful lunatic three times filled and running over with hate and spite and poison, is irritated at this! So is the “Dean of Students,” (whatever that is; we never had one at my school!), played by Jeffrey Jones, whom we know from The Hunt for Red October and also from mug shots!
Ha ha! John Hughes, whose directorial touches graced Weird Science and Uncle Buck, put this thing together, and by garr, I say he did a good job! He certainly hired the right people: Tak Fujimoto’s photography is top-notch, and Paul Hirsch edits the picture in exactly the way it needed to be edited! Whether the characters rub you the wrong or the right way, we must admit the performances are good across the board, with Alan Ruck in particular nailing the anxious, psychosomatically sickly sidekick role! Plus there’s a whole gallery of welcome faces in the supporting cast, like Richard Edson from Stranger Than Paradise, Kristy Swanson from Deadly Friend, Del Close from The Blob, Larry ‘Flash’ Jenkins from Armed and Dangerous, Max Perlich from Cliffhanger, and Cindy Pickett from DeepStar Six! And of course Charlie Sheen from No Man's Land shows up in a scene-stealing police station cameo!
But what’s old Burl’s opinion of the picture, you may well ask? Ha ha, well, my relationship with it is slightly complicated: I can’t watch the movie without kind of hating Ferris and his life of privilege and his whining about getting a computer instead of a car for his birthday! Wah wah wah! Ideologically, I’m predisposed to hate the picture! At the same time, by dint of timing and circumstance, I can’t help but love it a lot too! Not only was I was about the right age for it, but when it came out I had just returned from a very eventful school trip to Chicago, where we had gone to museums and a ball game, and ascended the Sears Tower, and had essentially enjoyed the city in the same way Ferris and his friends do on their day off; and there were romances and shenanigans and the evading of teachers and a general building of character along the way! Inviolable synaptic connections were thus formed at the outset, so on some primal level the simple fact is that I will never be able to quit Ferris Bueller’s Day Off!
So there it is, and I hope you’ll all take this review in the proper spirit and with the appropriate grains of salt! Ha ha! And I’ll end this review by asking an open question of my American readers: are all American high schools as strict as this, with their truant-hunting deans and so forth? Between this picture and The Breakfast Club, John Hughes gives the impression that high schools, at least in the greater Chicago area, were something of a penitentiary experience for the students! Canadian schools were a lot more laid back, ha ha! Anyway, for technical skills and undeniable charm and a hold that just won’t let go, I’m going to give Ferris Bueller’s Day Off three nice stretch jobs with a TV and a bar! Ha ha, how about that?