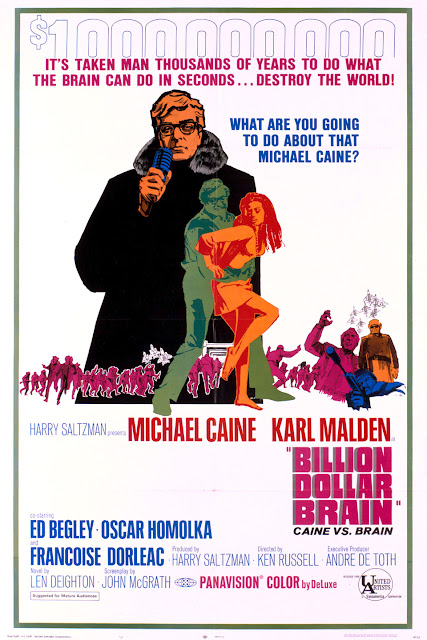 It’s me, Burl, with a review of a spy picture for you! Like everyone I was saddened to hear of the death of Ken Russell! He had a pretty good run there for quite a long while, with his biopics and musical movies of the 1970s and his eccentric 80s pictures like Crimes of Passion, Lair of the White Worm and Salomé’s Last Dance and even Gothic! And of course movies like The Devils, Women in Love and Altered States are all plenty of fun! I heard he ended up making pictures in his garage at the end there, using his neighbours as actors, which strikes me as some pretty impressive dedication to the craft!
Billion Dollar Brain is a bit of a standout in his filmography! Ha ha, it’s a spy picture as I mentioned; one of those Harry Palmer movies in fact, like The Ipcress File or Funeral in Berlin! This was the third one to come along in as many years, and thanks to Russell, it’s certainly the weirdest of them! It starts out fairly normally, with former spy Palmer, now apparently a low-rent private eye and played by Michael "The Island" Caine, being forcibly re-recruited into the service by his old boss, and then hired by a supercomputer with the voice of Donald Sutherland to deliver some eggs to Helsinki! Soon Harry’s in Finland hanging out with his old buddy Karl Malden, of Phantom of the Rue Morgue fame, and then in Latvia with the hilarious Oscar Homolka, and now and again he’ll take another phone call from the supercomputer!
Eventually all this traipsing around the beautifully photographed snowscapes of Northern Europe leads Harry to Texas, of all places, to the compound of General Midwinter, a crazy right-wing oil-rich nutbar who fears communism so much he wants to risk World War III by fomenting rebellion in the Baltic states! Ha ha, it’s the same logic employed by another Texas millionaire-moron-warmonger in the run-up to the war in Iraq – surely the people are so hungering for Western-style democracy that at the slightest provocation and with the smallest hint of Western backing, they’ll rise up and do most of the work themselves!
Well, as was the case in Iraq, it doesn’t quite work out that way for the General, and there’s a massive climactic sequence of chaos on the ice such as was seen in the great Sergei Eisenstein picture Alexander Nevsky! But the curious thing is that neither the supercomputer after which the movie is named, nor the ostensible hero of the piece, Harry, have much to do with it! Harry himself, blundering along after the General, is nearly wiped out along with Midwinter and his army of yankee-doodle fascists in fact, and only escapes by the skin of his teeth!
So there is a fair bit of goofology in the film’s plot and construction, and the curious eccentricities of Ken Russell are certainly evident even at this relatively early point in his career! But the cast is game and the photography very nice, and there are plenty of entertaining details, especially when they get to the actual supercomputer! And, as in Malone, the presence of a right-wing bad guy is sort of appealing, since they seem so much like bad guys in real life! I’m sure there are lots of people across America not so far removed from this General Midwinter guy, even if he seems a bit like a particularly cartoonish villain from the old Batman series! Ha ha, he could be called The Superpatriot or something like that!
Anyway, I enjoyed this picture quite a bit, as I have enjoyed most of Ken Russell’s films, and I award it three fantastic wooden ferris wheels!
Posted by Burl at 17:23